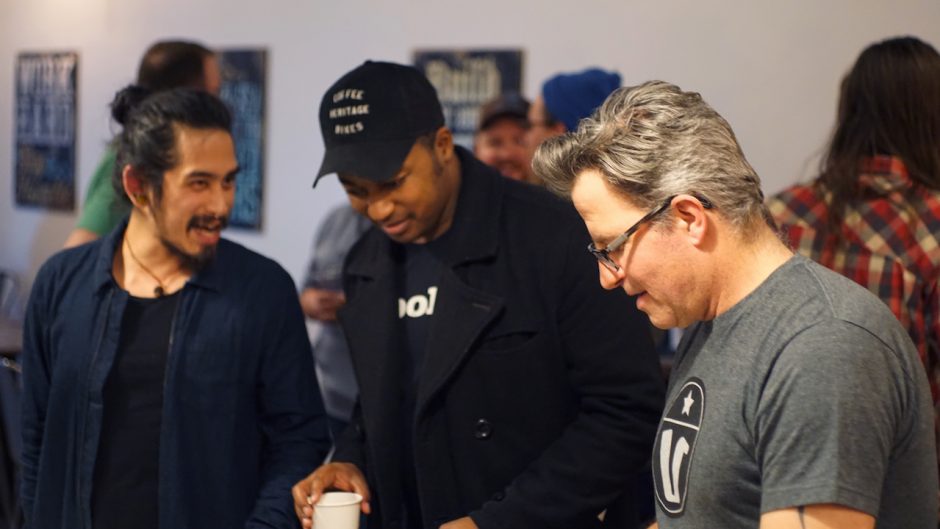 Before joining Genuine Origin as a partnership manager in the Chicago area, Rich Futrell was a coffee shop owner, a barista trainer, a stellar salesperson for Counter Culture and — as he still is —an optimistic believer in the social power of coffeehouses.

“Children, I suspect, are instinctively attuned to the climate of human relations around them and experience an inner joy and serenity, a feeling that all is well when the adults in their lives relax and laugh in one another’s company. … I have never since lost my appetite for it.” — Ray Oldenburg, The Third Place

Genuine Origin: Tell us about your coffee history and what that’s meant in your current role as a partnership manager for Genuine Origin?

A lot of people look back at the ’80s and ’90s as the Dark Ages of coffee, but as far as the social aspect of coffeehouses, it was a really cool time. And that’s what got me interested in opening a coffeehouse, which is what I did when I dropped out of grad school.

GO: What were you studying?

GO: Why The Third Place?

RF: It was based on a 1991 book called The Great Good Place by a guy named Ray Oldenburg. He was a sociologist from Florida, and he wrote this book that talked about how you have three places in life. You have home, which is the first place; work is the second place; and then you have a third place. These are gathering places where people can go, outside of the first and second place where they fit into a hierarchy or play a role of some sort.

“You have home, which is the first place; work is the second place; and then you have a third place.”

A third place is sort of a natural, neutralizing meeting place. Traditionally there are third places like Main Street, barbershops, beauty salons, bars, cafes, libraries. He wrote this book basically talking about the disappearance of third places in America, and how that has a detrimental effect on society, because we’re losing these places where people just naturally communicate and build ties. Both on a micro level and on a personal level people need this, and on a macro level communities need this because that’s a place where a judge can meet a janitor and just hang out and be buddies.

GO: Places that prevent others from becoming “the Other.”

RF: Yeah. If a judge is at the courthouse and the janitor comes in to take out his trash, there’s a hierarchy there. That’s why these places are important. That’s why we went to start this social petri dish called The Third Place coffeehouse. It was successful, and it was a gathering place, and I actually did see a judge and a janitor meet in line and become buddies. They were coffee buddies. They would meet every morning and have coffee and chat, and they became buddies. When I saw that I knew it was a successful concept.

GO: Where were you buying your coffee from, and were you roasting?

RF: I had a friend, a guy whose roasting plant was literally across the street from my house. His name was Larry and his coffee was Larry’s Beans. My shop was a mile up the road, and his roasting facility was across the street, so we had a really super tight connection. Through Larry and his activities, I was exposed to the idea that coffee comes from incredible places and that there are different roasting profiles.

I was trained as a barista and then I became a barista trainer. My 10 years as a shop owner got me very, very interested in coffee and what goes on at origin. After 10 years I sold the shop to a friend. He still owns it. Then I went to work for Counter Culture, where I worked for 11 years.

“I was trained as a barista and then I became a barista trainer. My 10 years as a shop owner got me very, very interested in coffee and what goes on at origin.”

GO: What did you do there?

RF: My role started in production — roasting coffee, bagging coffee, shipping coffee. It’s really producing, from green coffee, the brown coffee that goes out. I started in production, then I went to local sales, then I became sales manager, then I became sales and customer service manager. That happened pretty quickly — within a year. Then my role was opening our regions and finding people, and hiring them, and training them, and opening Atlanta, Washington, DC, New York City, Philadelphia. Then, when it was time to open Chicago, I moved back to Chicago, because that’s my hometown.

Then this August, I got a call from a friend of mine, who ironically was a guy I hired at Counter Culture in 2006. He told me about Genuine Origin, and I was super inspired. I’d always wanted to get a little farther into the supply chain, but I never really wanted to be a trader. I’m more of a people person and a hands-on person, so this role at Genuine Origin has been a perfect fit.

GO: What advice do you have for small coffee shop owners and roasters?

RF: First of all, quality. One thing I learned from Brett — and I really do give Brett Smith at Counter Culture credit for this. The thing that Brett puts in front of everything else is quality. It has to be good. A term that we came up with, and that I’ve seen other people use, is the proof is in the cup. When we would get distracted by a million different things, we’d say, “Well, let’s stop. Hold on, taste the coffee. Is the coffee good? The coffee’s good. Okay, that’s where it has to start.” The coffee’s got to be good. It’s got to be great.

Next, customer service is tremendously important. I had a single local shop, and we considered the people who lived within a mile to be sort of our break-even population. If the people who lived within a mile of the shop loved us and embraced us, then we would at least break even, and then anybody else who wanted to come over and explore us, that would be our profit. That’s kind of how we looked at that. We wanted to be welcomed by the neighborhood and embedded in the neighborhood, and we wanted to be a good steward of the neighborhood.

For example, there was a grade school across the street. We gave all the teachers a 10% discount, and then we started seeing more and more teachers come over. They would have meetings there, they’d come before school, they’d come after school. Then the parents would come in. So we became a part of the school culture, even though I didn’t have kids at the time.

One time we got interviewed by the NC State School of Business. They came in and said, “We heard you hire people because they’re nice people. That you don’t hire people with experience.” We said, “Yeah, that’s right.” They said, “That doesn’t make sense from a business perspective.”

I said, “Look, it’s just coffee. It’s not very difficult. I can teach anybody how to make a good coffee and how to follow freshness standards, but I can’t teach them how to be a personable, nice person.” The way that I used to interview people is I’d sit down and I’d just have a conversation with them. Well, first of all, the first question I would say is, “Do you drink coffee?” If they said no, I’d say, “I really don’t know if you can work here, because if you’re going to be a barista, you have to taste the coffee all the time.”

“I can teach anybody how to make a good coffee … but I can’t teach them how to be a personable, nice person.”

But the most important thing was having baristas and staff who were just friendly, interesting people. I also felt like I wanted to choose people that I wanted to be around, and that was a really luxurious place to be, because in most jobs you don’t get that opportunity. I chose really interesting people — artists, musicians and lots of different people who added to this social milieu.

GO: To your petri dish.

RF: Yeah, exactly. We had a social Petri dish, and we were popular with international students, and we were popular with same-sex couples. We were in the neighborhood where Jesse Helms was, and he was a very conservative Republican Senator. We had some old-school, blue-blood Republican ladies who would come in and have tea. We just had so many people from different walks of life who felt comfortable there, and it was nice to see everybody mixing and being together. So yeah, the short answer is: quality; be a part of your community; and customer service.

GO: What are the biggest challenges that third-wave coffee faces?

RF: I always think about when The Clover came out. That really started single-serve coffee, and there was a big focus on quality and everything, but I think it left a lot of coffee drinkers behind, because they never felt welcome in those really cutting-edge coffee bars. There are a lot of people who still like dark roast coffee, or who like a Costa Rica Tarrazu instead of a Llano de Los Angeles, and it’s our job to welcome them, and bring them along, instead of making them feel like they’re not part of this club.

I also think it’s pretty important to have an approach to tea and food that’s as focused on quality as your approach to coffee. I know a lot of coffee people are afraid of food, because the margins are lower, and you can have a lot of waste, it can be risky, there’s more build-out involved. But I know when I get coffee, I get hungry, and I’ll stay and have more coffee if I can have some food, too. I’ve seen some third-wave shops, instead of having a huge food menu, have a laser focus on one or two really creative, high-quality offerings — maybe it’s hand pies, or beautiful little European-style sandwiches — that rotate on a pretty regular basis. And I’ve seen that work pretty well.

GO: How can we, in the coffee world, encourage more people to drink excellent coffee?

“I think barista throw-downs and small roasting competitions are great, because we get the coffee community together.”

Part of it, as I said, is giving people some food options that give them another opportunity to come in every day and get their breakfast at your shop and not just their coffee.

But overall, it’s important to look to each other, and instead of trying to battle each other really work together. I think barista throw-downs and small roasting competitions are great, because we get the coffee community together, and we share, and we have fun, and we drink beer. But it’s also important to have events that invite the wider public in, and say, “This isn’t just, like, the Honeycomb Hideout for baristas. We want everyone to come in and experience the specialty coffee culture. This place is for you.” •

Mix and Match Discounts Are Here!