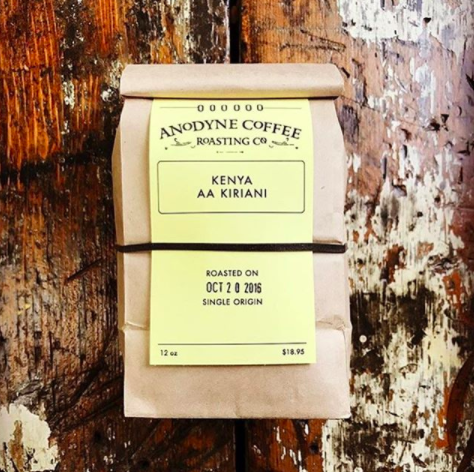 Anodyne, as an adjective, means relaxing; capable of soothing or eliminating pain. As a noun, it’s a “source of soothing comfort.” For Milwaukee, Anondyne Coffee Roasting Co. — a café, event space and wood-fired-pizza destination that opened in 1999 — is surely both.

Wolfgang Schaefer, Anodyne’s director of coffee education, will be at CoffeeChamps in Austin Feb. 11–12, competing in the Brewer’s Cup. Below, he answers a few questions about his decision to compete — and to do so with Genuine Origin AA Kiriani.

Genuine Origin: What do you look for in a competition coffee?

Wolfgang Schaefer: I never think about competing for the sake of competing, so I don’t really seek out competition coffees. If I’m gonna subject myself to the kind of unnecessarily anxiety-provoking masochism that is the USCC, it’s because I was particularly moved by a coffee. Kiriani did that for me. It’s complex and sparkly and dynamic but also balanced and clean and tart and sweet. It’s got it all.

GO: What made you choose the Kiriani?

WS: I knew the moment we cupped it that it was comp-worthy. When you drink it, you want so badly for other people to taste it. It’s an experience. And I’m honored to show it off.

GO: Have you competed before — and did that experience influence your decision?

WS: I have competed before. I’ve done the Barista Comp, but I’m in the Brewer’s Cup this time around. The experience can be heartbreaking. I’ve had some successful moments and some unsuccessful moments. And the unsuccessful ones are what kept me from entering in recent years. But I guess maybe I think about it differently now. I try not to take it too seriously.  We’re trying to make coffee better than the next guy. It’s rather silly when you think about it. You gotta work hard, sure, but you can’t take yourself too seriously. Can’t lose sleep over it.

GO: Would you mind talking about how you plan to roast the coffee, or treat it?

We’re still tweaking it here and there, but we’re so very close. Nolan Truttschel, our head roaster, is a freaking saint for working with me. It’s a delicate coffee. Nearly imperceptible changes in drop time, charge, development and whatever have a massive effect on the flavor profile. But ultimately, we’re looking to showcase the dynamism of the coffee. Super tart and super sweet, full-bodied and delicate, balanced but kooky.

GO: In competing, is there one thing you’re really trying to get across?

WS: I hope to get people excited about experimentation. I’ve learned infinitely more about coffee through brewing mistakes than through following formulas. Formulas are boring. •