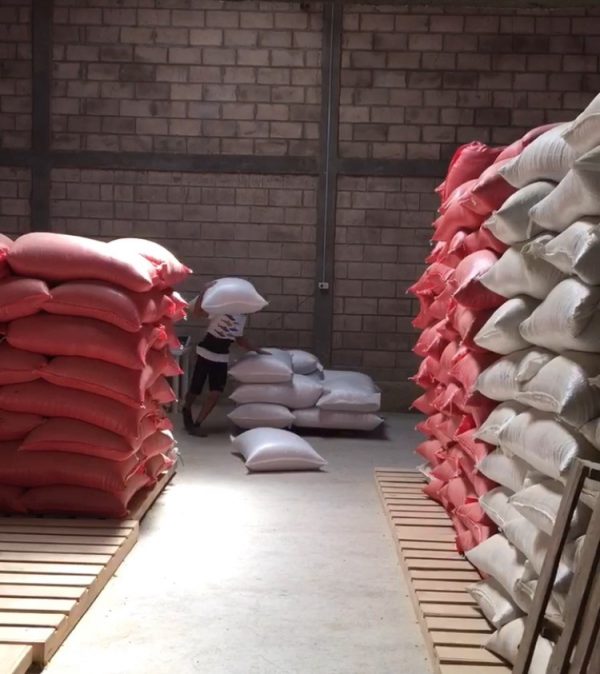 Aaron MacDougall, roaster and owner of Broadsheet Coffee Roasters, won our Roast and GO competition  — and a trip to Honduras,  home of his competition-winning coffee. To our delight, Aaron agreed to write about his experience. Below is his second installment in a series.

Wow, what a perspective-expanding and interesting day and a half! So much happened that I’ll need to blow through this super quickly and won’t be doing any of it justice.

We arrived at San Pedro Sula airport at around 1:30 to mid-80s weather and a bit of a squall, but Genuine Origin Honduras staffer, agricultural sciences graduate and coffee database Carlos Umanzor picked us up in a big Toyota SUV and we bundled off to the hotel.

We dropped off our bags and headed to a local snack shop for baleadas, a local treat of fresh, thick flour tortillas slathered in refried beans with eggs, queso fresco and avocado.

We didn’t see a lot of San Pedro Sula, which seems to be a bit of a commercial/industrial city with a worryingly high ratio of fast food establishments to population, with pretty much every U.S. fast food restaurant represented (including the semi-obscure ones, think Arby’s etc.)

Molinos de Honduras (MDH) General Manager Frank Reese also joined us for several hours. He spoke about the role that modern exporters like MDH, Genuine Origin’s sister company in Honduras have played in disrupting the traditional supply chain model of small farmers receiving financing from and selling their coffee to “intermediarios,” and the work that MDH is doing with Technoserve, a major USDA-financed NGO.

Finally, we had a remarkably drinkable espresso at a snazzy and modern café called Nordic, before dining on gourmet pizza and calling it a night.

We left at 7:30 this morning for a rough and slightly nausea-inducing four-hour drive through winding mountain roads that grew more scenic the farther we got from the city and the higher up the mountain.

Donkeys, birds of prey, sugar cane, banana trees, at times rocky and at times lush vistas and finally coffee. I was super lucky to be in a car with GO coffee mavens Teresa von Fuchs and Elisabel Castillo, along with Carlos, and we basically talked non-stop about the coffee supply chain at origin from the mountains to the point where coffee is loaded onto container ships.

Perhaps the most eye-opening thing I took away from the discussion is how much work is required, not only to grow high-quality coffee and process it, but how many hands are involved in quality control at every step of the way — how many times each coffee is sampled, roasted, cupped and judged even before it gets to the U.S.

We arrived at the Cafico Mill in Copan, which works with about 50 small farms (3–4 hectares on average). The function of Cafico is technical, educational and financial. It works to educate, enforce growing and environmental standards, and to sustain the quality of the coffee. Producers deliver their freshly picked coffee cherries, which are dumped into a sorting tank. The low-density (defective) floaters are skimmed out, along with any twigs. The cherries are then pulped (the fruit surrounding the seed is removed) and any unripe cherries are separated out. The pulped coffee is then washed and stripped down to its parchment — the hull that covers the seed we call the bean—and then laid out on a drying platform under the sun for a day.

The parchment coffee is raked and turned every 15 minutes or so throughout the day to ensure aeration and even drying. At this point, the coffee is at about a 45 percent moisture level — still far too wet to store or transport. It then goes into a mechanical vertical dryer for 10 hours, followed by a drum dryer for 24 hours. (Both are fueled primarily by burning coffee parchment.)

Perhaps the most eye-opening thing … is how much work is required, not only to grow high-quality coffee and process it, but how many hands are involved in quality control at every step of the way — how many times each coffee is sampled, roasted, cupped and judged even before it gets to the U.S.

Microlots — the highest quality coffee separated out by the farmers for special treatment — are dried for about 10 days in a ventilated green house of sorts called a solar dryer, and defects are removed by hand.

At this point, the coffee is bagged and ready to be transported to a dry mill for storage for up to two months to “rest,” to even out the drying and then for milling of the parchment immediately prior to bagging and loading into containers for shipping.

The Environment — and Lunch

Also very interesting was the concern shown for the environment at the co-op, starting with the use of solar panels and the recycling of waste water. Dirty water from the processing of coffee cherries is fed into a fermentation pool that’s spiked with micro-organisms that break down the organic waste. It’s then filtered into two additional pools and at the end of the bacterial and mechanical filtering is fit to be used on crops. The skin and pulp solid waste is also treated with micro-organisms and broken down into fertilizer to be re-used in the fields.

After our tour of the facility, we lunched (roasted pork, marinated sliced pork, cheese, vegetables, rice salsa and tortillas) and then cupped 12 co-op coffees ranging from “conventional” to microlots of both washed, pulp natural and dry processed coffees. Then, it was back into the trucks for another half-hour drive up rocky mountain roads/paths to the coffee farms.

The fields were picture-perfect, bright dark green coffee bushes interspersed with shade trees, lovely in the golden-hour sun. The density of the coffee plants was incredible—jammed in shoulder to shoulder, branches still heavy with fruit even toward the end of the picking season. Sergio, the owner, had so much to say regarding picking, soil maintenance and the like… But that is a topic for the next post.