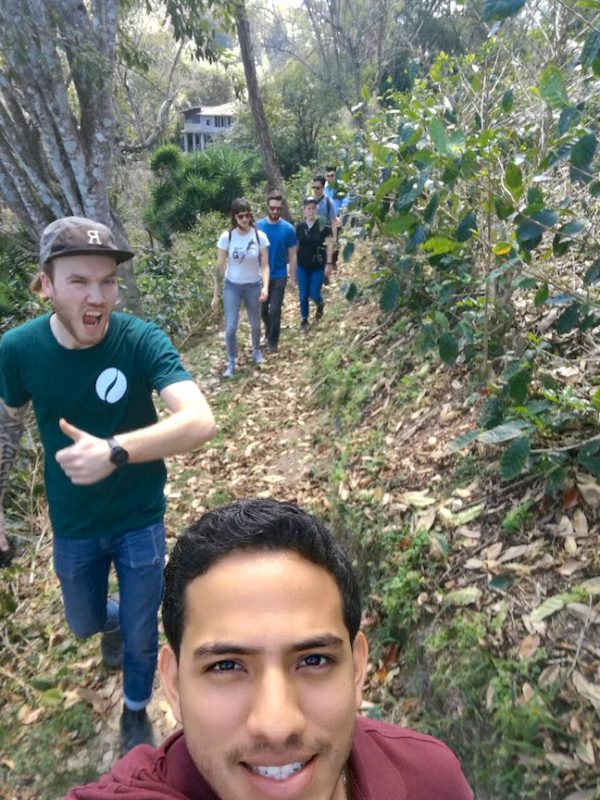 Aaron MacDougall, roaster and owner of Broadsheet Coffee Roasters, won our Roast and GO roasting competition — and a trip to Honduras, home of his competition-winning coffee. To our delight, Aaron agreed to write about his experience at origin. This is his third installment in the series. His first and second posts are also great reading.

I left off yesterday’s post at Sergio Romero’s farm in Copan, Honduras.

What is most remarkable is the incredible density not only of the coffee bushes, but also how densely packed the cherries are on the limbs. Sergio claims the productivity of his farm is about 50 bags of parchment coffee per hectare (versus the national average of 18–20 and the Cafico Co-op average of 32). He ascribes the incredible productivity to several factors:

Quality of the soil

He is quick to point out the thickness of the rich dark soil loam on top of the packed clay, probably about 8” or so. He says this is the primarily the result of the soil not having been abused in the past, allowing for the growth of other plants in between the coffee plantation. He says the short, bushy Icatu variety of coffee in front of us is organic and thus no chemical fertilizers or pesticides/fungicides are applied.

Sergio says they trim the overgrowth annually to ensure that all plants and all parts of the coffee plants are receiving adequate amounts of sunlight, which also allows him to plant the coffee bushes close to each other. Branches fruit from the nodes closest to the trunk, but after fruiting these nodes lose their productivity. Fruiting in subsequent years starts where it ended in the prior year, farther out on the branch. After a couple of years, overall productivity falls as the growable space on the branch runs out — which is when he trims them down.

Moreover, Sergio says that productivity of a given coffee shrub peaks around years 4 or 5, and he “stumps” the plants when they’re 8 years old, cutting everything down to about half a foot off the ground.

We are at 1600m above sea level, up the side of the mountain, and sample the ripe coffee cherries . The thin fruit is delicious, sweet and highly acidic.

Miraculously, new coffee shoots emerge from the side of the stump, still plugged into the existing root structure. His team select the “best” couple of these shoots and cut the remainder, allowing the plant to concentrate all its energy into the selected shoots, which quickly grow into productive adult coffee plants.

Frustratingly, coffee cherries don’t all ripen at the same time, but rather over a picking season that can last (in Honduras) from December to May. Sergio’s pickers typically make four passes over this period, picking only ripe red cherries (the sweetest, with the highest sugar content in both the cherries and the coffee “beans”). And, they are paid to be careful, to avoid breaking the delicate branches, which would stress the plants and lower their productivity.

Moreover, Sergio pays his pickers an extra 40% per basket for the final pick, where they’re paid to not only pick the remaining ripe cherries but remove all fruit from the tree and surrounding ground. One of the worst pests in the coffee farm is the coffee borer beetle, or broca. These small insects bore through the fruit and into the cherry and eat the germ. Fruit left on the branches or to rot on the ground can attract broca, which breed and then infest the fruit the next year, ruining the coffee.

The Icatu variety Sergio has chosen has some resistance to both broca and leaf rust (roya), a fungal scourge that can completely destroy coffee farms.

We are at 1600 meters above sea level, up the side of the mountain, and sample the ripe coffee cherries . The thin fruit is delicious, sweet and highly acidic.

Sergio points higher up the mountain to where he has planted a type of palm tree as a wind screen for his coffee. He says that the coffee shrubs at the top of the mountain, 1800 meters up, were wiped out by roya so he had to plant new shrubs. His choice: the Geisha variety, originally from Ethiopia and famous for its floral and bright Ethiopian-like flavor profile. He says that the altitude and variety could create something very special.

Looking up to the top of the steep, rocky mountain, it is impossible not to notice that it is complete inaccessible by motorized vehicle. Sergio says that he uses donkeys to access his new fields. There is nothing easy about specialty coffee.

Good stuff? Click to read Aaron’s first and second posts in the series.