Sump Coffee on Life, and Coffee, with Intention 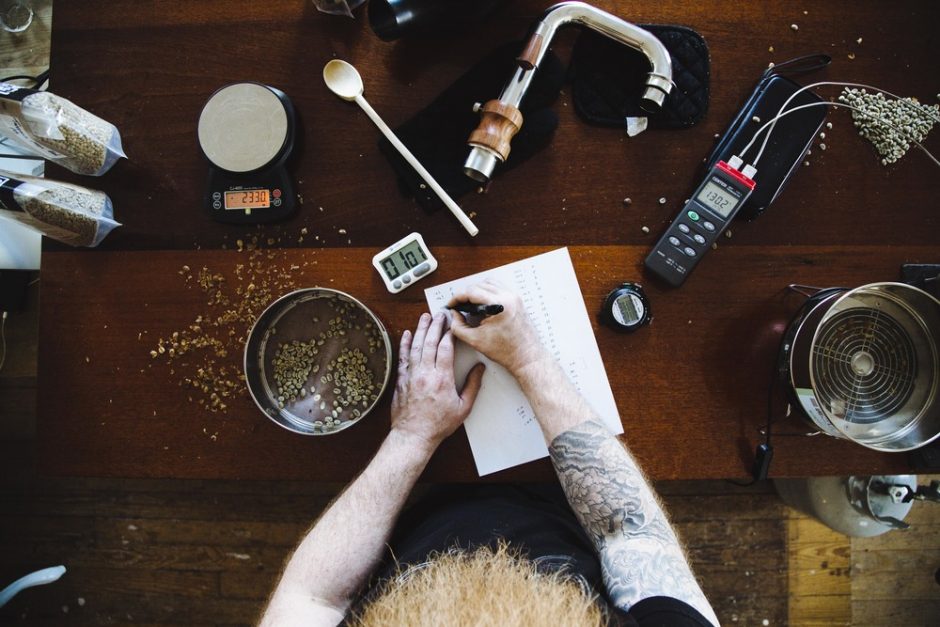 The mustachioed skulls, the ginger beard, the reclaimed wood. It would be easy, but callous, to dismiss Sump Coffee or Scott Carey as “hipster.” Look closely, and in every detail a passion becomes apparent. An earnestness. Intention.

Carey was a clean-shaven, suit-wearing lawyer in New York City when his brother, Jeff — a hands-on contractor, a craftsman — was diagnosed with cancer. Carey left his job and moved to St. Louis to be with Jeff, and they decided to buy and renovate a building near the treatment center, creating a place to stay and a project. But before construction began, Jeff passed away.

Left with a building and his brother’s tools, Carey paused and took stock.

“Sometimes, being a lawyer, or sometimes having a complex job that’s connected to influence, it’s harder to articulate yourself at the end of the day. Am I doing a good job? Am I making the right choices? Am I compromising because I have a mortgage and maybe a kid?” he continued. “I had already compromised and made safer choices in the first portion of my adult career. I wanted to create something maybe very uncompromising, or very specific.”

Scott Carey created Sump Coffee wanting “something that is creative and meaningful for myself.”

Because neither he nor his girlfriend, Marz Yamaguchi, a former graphic designer at Rockstar Video Games, came from coffee backgrounds — aside from a long appreciation for a good cup, ignited by Ninth Street Espresso in the early aughts, in Carey’s case — they were able to start “from whole cloth,” says Carey, which helped them avoid a lot group-think, or the expected ways of proceeding.

Which includes encouraging others to take a little time for themselves.

“People, at the end of the day, can go home and have a nice glass of wine, or a nice craft beer. But there’s no place for that in the beginning part of the day. … If you’re like, ‘I just need something quick. I need to wake up my brain, I need to keep going.’ To me, you’re not gifting yourself anything. If you’re going to spend $5 for coffee, you should gift yourself an elevated experience. Not just in having a quality coffee, but in having it in an environment with intention.

So, he adds, Sump is “about all those things, and we couldn’t do it without the people who come in and spend money in the shop. Hopefully, we’re able to communicate those elements and they appreciate it and they come back.”

When it comes to selecting coffees, Carey concedes he has an approach, though he insists it’s far from singular.

“We don’t offer any year-round SKUs. We don’t have any cool, cheeky blends… We’ve always kind of tried to steal from what it’s like to have a nice glass of wine in a wine bar. We want to highlight where the coffee came from, any post-harvest processing, the vintage, if you will. If we’re lucky to get coffee year-after-year from a particular farm, we want to underscore that this tastes different this year, due to things like rainfall and age of the plant.”

He tells a story about being young and knowing nothing about wine, and going to a winery, where someone lined up a few glasses and gave him the tools he needed to begin really experiencing wine.

“Not every coffee out there is going to be for everybody, but … like a good sommelier will, you can help someone find the cup they’re looking for. … Some people will say, ‘I like strong coffee. I like bold coffee.’ What they’re really saying is they like dark-roasted coffee. What we want to do is give them the tools to articulate the experience they’re looking for. Then offer them a bridge to understand a bit more breadth into the landscape of what’s possible in coffee,” Carey continues.

“Basically, if you’ve ever had a great experience in a wine bar with a really knowledgeable sommelier, who wasn’t arrogant, who didn’t just feel like telling you everything he knew and overwhelming you. But somebody who actually helped and broadened and gave you a little bit of information, so then next time you went somewhere you could drill a little deeper, that’s what we’re trying to do with the coffee,” he says. “So, we don’t have regulars coming in for a 365-day-a-year SKU. We have different coffees … and it’s an ongoing conversation.”

Which isn’t to say he’s got it all figured out.

“The point is just to provide something very distinct and special, with the hope that people will have a connection to it and come back. And if they ever have to leave St. Louis, or if they’re passing through and they have an experience here, that it’s a treasured experience. It’s very important, I guess for me personally, that people feel that way.” •

*Our thanks to Emily Suzanne Photography for the beautiful photos!