Honest Coffee On What’s Simple (and Not) About Coffee 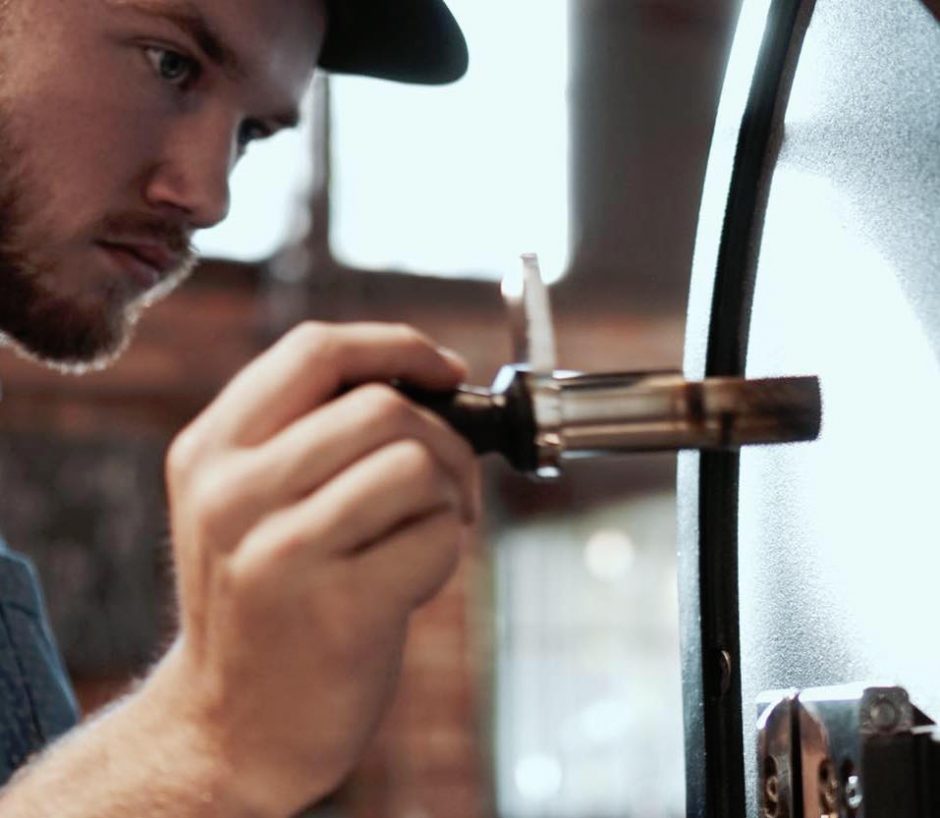 The Honest Coffee Roasters site opens on a video of Brice Sturmer, its green coffee buyer and roaster, waking in the dark.

He hand-grinds beans, prepares a pour over, sits with a mug and a writing journal, and eventually pedals off on his bicycle through still-dark and empty Franklin, Tenn. At the Historic Factory building, he turns on the lights and, at the center of the big, beautiful shop, sets up a cupping, acquaints himself with some beans and begins roasting, as gradually the morning and his neighbors’ routines hum to life around him.

The only audio is Brice reading three coffee haikus — “Can’t wait for coffee / to make me rise each morning. / Coffee waits for me.”

It is a two-minute meditation; a celebration of routine, of simplicity, of coffee.

“That’s my favorite moment of this job,” said Sturmer, during a recent call.

“When I want to profile a new coffee, I’ll wake up super early and ride in thinking about it, without listening to music,” he explained. “I like to go through the city while it’s dark and no one’s awake, start up the roaster, have a cup of coffee. And we roast right in our shop, so you can get distracted by people, customers asking questions, baristas getting backed up and needing help. Whereas if I come in super early, I can just focus totally on the roaster.”

Honest Coffee Roasters, in the Historic Factory at Franklin, in Franklin, Tenn.

In December, Sturmer placed second in the Genuine Origin Roast and GO competition, and in February, as part of his prize, he flew to Honduras to tour coffee farms and mills, including those that produced Guama Danta, the competition coffee. Sturmer was hoping to scout suppliers for Honest, as well as for Velodrome, a new coffee venture he’s creating with his wife, Teagan.

When we spoke, the question of simplicity — of what’s simple about coffee, what’s not and even what appears simple but isn’t — seemed a natural place to start.

“I’ve been a firm believer in single-farm coffees, and in being able to trace coffees to the farms they come from,” said Sturmer. “And since I value traceability so much, it’s hard for me to buy coffees that come from community lots, where I can’t tell the story of an individual.”

Before Honduras, he’d visited coffee farms in Guatemala, where he saw small, single-family-owned farms. Honduras was “a whole different story,” at an entirely different scale.

“I’d say Honduras helped me realize that there are a lot of benefits to [community coffees] that I hadn’t realized before. And even that the middlemen and intermediaries, which can sound like negatives, actually provide benefits that help people be able to live.”

He continued, “The trip helped me to understand a bit more about the framework that needs to be in place sometime, just for people to be able to get their coffees out. And the importance of building the specialty coffee industry and making more better coffee more widely available. So, I appreciate a lot of the stuff that’s being done in Honduras for those reasons.”

Teagan and Brice Sturmer are working on a new venture, the Velodrome Coffee Company.

At Genuine Origin, we think a lot about how and where we can simplify coffee — like having origin operations where our colleagues create real relationships with producers, so we can not only scout for the best coffees all over the country but also positively impact coffee-producing communities. We also offer the ability to buy online and buy very small amounts of dozens of different coffees — each of which links back to specific producers.

When it comes to presenting coffees at Velodrome, Sturmer has some ideas that he hopes will also simplify things.

“We’re going to do these amazing, single-farm coffees, and people probably will have never tasted anything like it. So, my approach is to try to simplify it. We’re going to have a different way to present the coffees that are really understandable. We’re going to create different categories for the coffees. Like, 10 Speed, 5 Speed, 3 Speed, Single Speed. And those will always be the same price points and adventure levels. So like, Single Speed will always be like a really nice Central American that’s nutty, full-bodied — classic. And 10 Speed will be maybe, like, Geishas.”

By selecting the coffees that he does, Sturmer’s able to create what he calls a “pretty intimate connection to the coffee,” which he remains mindful of during the roasting process.

“We roast on a fully manual Probat with a cast iron drum. So, you have to be pretty in tune with that,” he laughs. “It’s not a Diedrich IR-12 that can change on a dime, and you can change anything you want from a computer screen. You really have to be thinking about your whole day, and which batch you’re roasting when, how hot the drum is getting throughout the day. You have to be really focused.”

Like so much about coffee, it’s about being intentional.

“Absolutely,” said Sturmer. “It’s about honoring all the people who had the biggest impact on the coffee.”

—
This article is part of our Roaster Life series, which has featured conversations with St. Louis’ Sump Coffee, Richmond, Va.’s Lamplighter and NYC’s City of Saints.