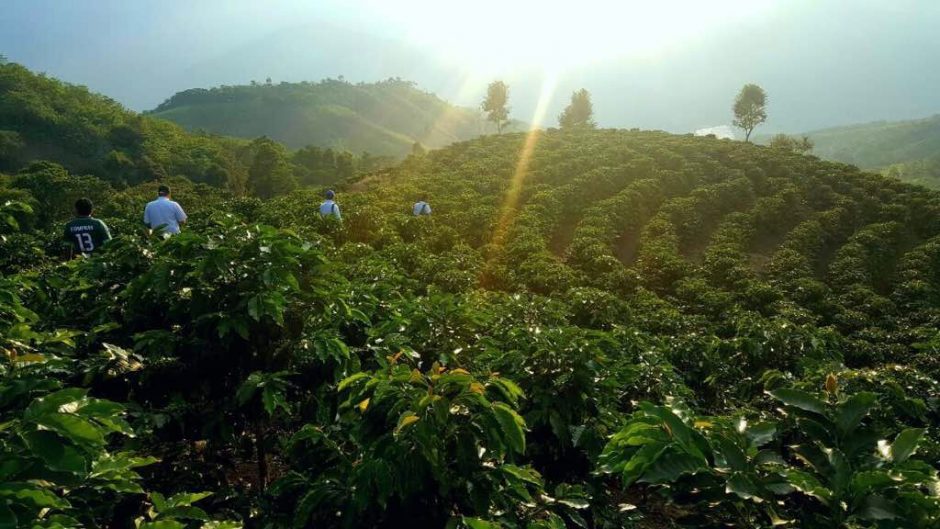 “This Chonta is quite singular and unique,” says Roberto Ortiz, commercial manager at Prodelsur, Genuine Origin’s sister company in Peru. Roberto hails from Costa Rica and attended the Volcafe training program in Costa Rica and later Peru, in “the center region — the jungle,” where he worked as a purchase manager and became acquainted with the country and its numerous regions, cultures and subcultures. A trained agronomist, today he works as a trader and assistant general manager in Lima, overseeing five purchase managers who, with their teams of agronomists and technicians, collectively work with 4,000 coffee producers.

We spoke with him recently about Café Chonta — a coffee from Chontali, in the Cajamarca region—for which coffees from 13 producers were selected. Below are edited excerpts from that conversation, in Roberto’s voice.

A Bit About Café Chonta

As you may know, Peru has worked for several years, and still does, with a large number of producers who work in organic production. But Peru was also the country that suffered the most from leaf rust — roya. It hit very hard on the varieties that give us a very singular cup profile: Typicas, Bourbones, Caturras, Catuai and Pache.

We had a huge crop in 2011, and then in 2013 the roya devastated thousands of farms. There were many instances where farmers came back to their farms — people who had been gone for a few weeks to sell their coffees — and literally came back to trees without any leaves on them. It happened very quickly.

Most of them, since they were producing organic, were not using any fungicide, and it’s quite hard to manage roya if you’re not managing a plant health program.

The 13 producers that we chose for the Café Chonta are getting both very good quality and very high productivity. Right now the north region, Cajamarca, and the northeast, San Martin, are the most productive regions in the country.

As for the name, chonta, is the name of the palm trees that are indigenous to the area and have many different uses — food, weaving, medicine. In this area of Chunchuchas, before they started working with cattle and coffee, you saw a lot of chonta. And you still see it on many farms, such as the producer Aladino Delgado, who contributed to Café Chonta — on his land you still see this heritage and it’s very nice. This area has a special feeling for this type of biodiversity and they conserve it, even though there’s a high production of coffee.

In Peru, the way we buy coffee is, we buy parchment. It is quite a challenge to access remote areas. As you know, Chontali (pronounced CHON-ta-li), is 3.5 hours away from Jaen. People are going through very hard times, especially with climate change, and it’s very hard for them to take the coffee to Jaen. So we help them.

Getting to these very remote areas is quite tough. Within the Chunchucas Valley, specifically Chontali, we have many producers. Many of them, they do have the quality, but it’s very hard for them to dry it, since they don’t have the ideal weather conditions. So we do a cupping of every single bag that comes in. We have full traceability of where the coffee’s coming from.

And when we choose which coffees, we evaluate quality and loyalty to the Volcafe Way principles. These are the main drivers that brought us to choose those 13 producers. They were complaint with every pillar, plus the cup profile we’re looking for.

Aladino Delgado is one of 13 producers whose coffees were selected for Café Chonta.

What Were You Looking For In the Coffees?

For most of these producers, this coffee is sundried. But some of them, since their farms are at such a high altitude — above 1,700 meters above sea level (or about 5,500 feet) — they sometimes have to bring the coffee to Jaen, which is 3.5 hours away and at about 700 m.a.s.l. It’s a large city and it’s much, much hotter and allows them to dry it in a faster way.

Usually, once they pick the coffee, they de-pulp it, they do the fermentation process at the farm. And then they eventually take this coffee to Jaen, or to a different drying facility. But they do a pre-drying in Chontali. So normally they take it down to what they call in Peru a standard. When they say standard, they usually refer to 30% or lower humidity. So if you have wet parchment, which is around 50% humidity, they’ll take it down to 3o, 25%. And then they take it down to the lowlands to continue the drying process. So, usually you don’t have issues with quality, since it was pre-dried.

This year, we plan to start a project. The idea is to teach all of the producers to have a technified system, using the materials they have on their farms. So for instance, if they have bamboo, or some type of wood, teaching them to use basic engineering techniques to build the largest drying structure on their farms, so they can have the best conditions possible.

Some of the coffees we’ve found here are fantastic, they’re just outstanding. There’s so much potential. With Volcafe Way, we’re excited there are still a few points we can raise this coffee, up to where it belongs. And truly, when I arrived in Peru, I was completely amazed — I didn’t know Peru had this kind of potential.

The Work of Volcafe Way

Before Volcafe Way started, we were already working with producers and several certifications. Volcafe Way has been an interesting transition — we’re helping farmers to see their farms as businesses.

Basically, we’ve been teaching them the basics — that if you want to have productivity, you have to learn how to nurture the plant, how to prune in the right way, always aiming toward bottom-line profitability. You have to do the right fermentation process for the right amount of time. Showing them how to dry the coffee in perfect conditions. And if you want to be profitable, you have to reduce your costs without sacrificing your productivity or your quality. So it’s a holistic system. It’s about working the farm as a businesses and a long-term project.

I have a favorite example — an agronomist in the company who is also a producer. He’s in charge of the Volcafe Way team in Jaen. Six years ago, he and his family had a harvest that was around 8 bags per hectare, approximately. They were obviously going through very tough times.

Then he went to study at Villa Rica, specifically at IRCAS — an institute created by Proyecto Tierra, and a project realized by Volcafe and Lavazza, that teaches young producers how to produce sustainable and profitable coffee. Alvaro Llobet, one of our consultants today, was one of the leaders of the program. So our colleague Wilder learned the basics of how to do sustainable agriculture. And he achieved it in a marvelous way. When he came back he started doing all of this — pruning, fertilizing, managing his costs in a very careful way.

Now, you go to his farm and you see production of 35 to 40 bags per hectare. And a cost of production that was above $150 per bag, he has a cost now of $75 per bag and his quality is basically so, so good that he’s one of the few producers in Peru who’s doing an outright business directly with one of the most prestigious clients in Japan. And this happened in less than 6 years! This is basically what we seek — we want the producers to really change the perspective with which they see the farm.

After two years in the trainee program in Costa Rica, they sent me to the lovely center region. The jungle! I worked there as purchase manager, and it was a marvelous time, getting to know the reality in Peru, which is 25 times larger than my country.

You have to really understand the different mindsets, cultures and languages. You have a lot of diversity here — of nature and of people. So it’s quite amusing as a human being, not just as a professional. I’m an agronomist working as a trader. So I have both perspectives — I understand the reality in the field, and I love the field. Combining this with the markets, day by day, is an interesting hybrid.

Roberto Ortiz at the Prodelsur processing plant in Lima, Peru.

What’s Your Favorite Thing About What You Do?

I’d say the paradigm shift of working in a growing country — not just growing in volume but in quality. It’s fascinating. You’re really putting your passion for coffee where it’s needed.

It’s not a small country, where things are just around the corner. Here you may drive up to 14 hours, and then you have to take a plane, a boat. You have to put your car on top of a boat, if you want to cross a river. There are a lot of risks and challenges, and it really pushes us to our limits. It helps us know what we’re really made of. And it’s helping other people to be better. It’s what we love.

What Would You Tell Roasters About Café Chonta?

There’s something I really enjoy about our friends in Chontali. They come from a culture that used to lived there, called the Pakamuros. Also known in Spanish as Los Bravos Pakamuros or, the brave Pakamuros — their tribe was never conquered by the Incas. This heritage makes them very tough. Very brave. And they work a lot. They didn’t have a proper road until about 20 years ago. These people used to walk for weeks to take their harvest out — we’re talking about 40 years ago. They started doing coffee 50 years ago, so there is a very interesting culture that comes from the Pakamuros and from the Spaniards who came into the Chunchucas Valley.

So, there’s an interesting combination of cultures and a very, very strong heritage that they put so much into. I love cultures, and — when you go there, you feel this really intense vibe that is very, very fascinating. It’s quite different. It’s something I’d never experienced before. It’s the best. It’s pure passion, and it’s heritage. •

Honest Coffee On What’s Simple (and Not) About Coffee