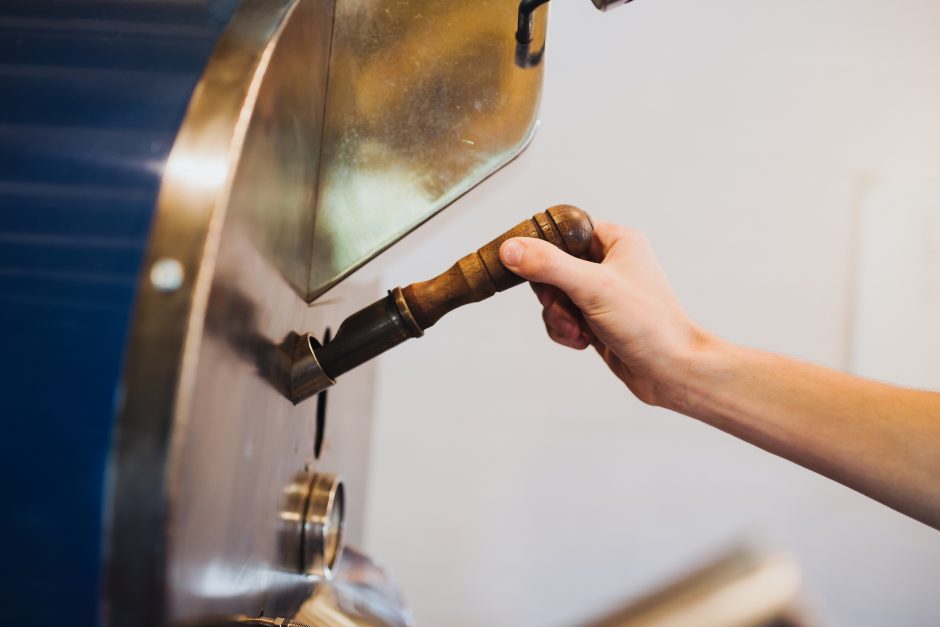 J. and Melanie McWhorter got to know each other working in a coffee shop in college. Years later, as a young married couple, they were keenly aware of the need for a great coffee shop in their Dallas suburb. While J. wanted to roast, they decided to first perfect their ability to “serve good coffee really well.” Fast forward two and a half years, and they were ready.

“We bought a used Probat L12 and started on that. And actually, we just sold that about three months ago and bought a 1988 Diedrich IR24, and we’ve been really, really happy with the change,” says J. “The older L12s have some airflow restrictions, and we’ve really been able to get our coffees tasting a lot cleaner with the Diedrich. There’s a lot more manipulation that has to happen with the way that you apply gas and air with the Diedrich. It’s not as brutally powerful as the Probat was, so it takes a little forethought and planning, and that’s really changed how we roast, which is fun.”

“We’re very aware of where we exist.”

With the move to roasting, the couple decided to leave the small franchise they’d began with and start fresh with a new name: Edison Coffee Co.

“Edison is my middle name — I’m actually James Edison McWhorter the V,” says J. “It’s kind of this family legacy thing. And we just wanted to make it ours. So, that’s a big part of why we changed.”

The change has been a successful one, and at the end of summer they’re opening a second café.

J. McWhorter, roaster and co-owner of the Edison Coffee Co.

A part of that success, J. believes, is Edison’s focus on the community it serves, which he says even influences what and how he roasts.

“We’re very aware of where we exist. We exist in a suburb. Most of our customers are parents stopping in after dropping off their kids at school, or they live nearby and are working from home.”

He continues, “Our basic principle of roasting is we want to maximize sweetness and maximize the solubility of the coffee. We want people to be able to come into our shop and buy a bag of coffee, and brew it at home, and have it taste as good as if they had bought it brewed at the shop. … The worst thing I can think of is you buy a bag of coffee, and you try to get it dialed in, and you’re 75 percent through the bag and you’re just now getting a cup that’s good. We’re really trying to maximize the sweet spot and the opportunity for people to drink great coffee.”

“The worst thing I can think of is you buy a bag of coffee, and you try to get it dialed in, and you’re 75 percent through the bag and you’re just now getting a cup that’s good.”

Edison also maintains a lineup of four to six coffees — enough so that customers will be interested in tasting through them all, but not so many that they might feel overwhelmed.

Working with Genuine Origin, J. says, enables him to be trying new things, with little risk.

“We could get one box of coffee from you guys, and maybe it’s a coffee that I’ve never roaster before, like a Tanzania. So maybe I buy a box and try to profile it — and that’s a relatively low-risk thing for me. If it works out well, I can add it to our lineup without having to commit to a lot up front. Cause even if I bought just one bag from another importer, with shipping and all that, the cost of the coffee per-pound is way higher than what’s justifiable.”

Additionally, he continues, “there’s always the possibility that I bought that one bag, and let’s say there were 11 bags total of that lot, and someone else came in and bought the other 10 bags. Then I just profiled something I can’t get again.”

Working with Genuine Origin, he says, gives Edison the ability to build up its lineup around coffees its knows it will have access to, and that it can get within a week of placing an order.

“For us it’s a better inventory system, and better for just-in-time ordering, where we’re not fronting a bunch of money to buy pallets of coffee,” he explains.

“Because we only have one cafe and a couple of wholesale accounts, we can’t justify spending $5k on a pallet of coffee. It would take us a couple of months to recover that cost. And you multiply that by four or five offerings, and all of a sudden you’re out $20,000, 25,000 to have a decent-sized lineup. Working with Genuine Origin lets us pick and choose what we want, and try things out a little bit before we commit to more.”

J. offers the example of a newer addition to the Edison menu, Café Chonta, from Peru.

“We added a box of that to one of our orders because Tony [Auger] had said it was a really great coffee and he thought it was something we’d like. And we had five chances, with that quantity of coffee, to get our profile right. And we really liked what we were able to do with it, in those five batches and decided to add it to our lineup.”

“The way we spend our money, as coffee roasters and as a cafe, shows what our intentions are and what our heart is.”

Generously, J. adds that in addition to enjoying GO’s model on the roaster side, Volcafe Way and GO’s work at coffee origins are important to him.

“It would be really difficult for me to say that we really care about the people we serve here, without saying that I also have care and concern for the global coffee community,” he explains. “The way we spend our money, as coffee roasters and as a cafe, shows what our intentions are and what our heart is. And if our heart is for coffee and community, that has to be shown in who we buy coffee from, too.” •

Coma Coffee on Being Young and Hungry