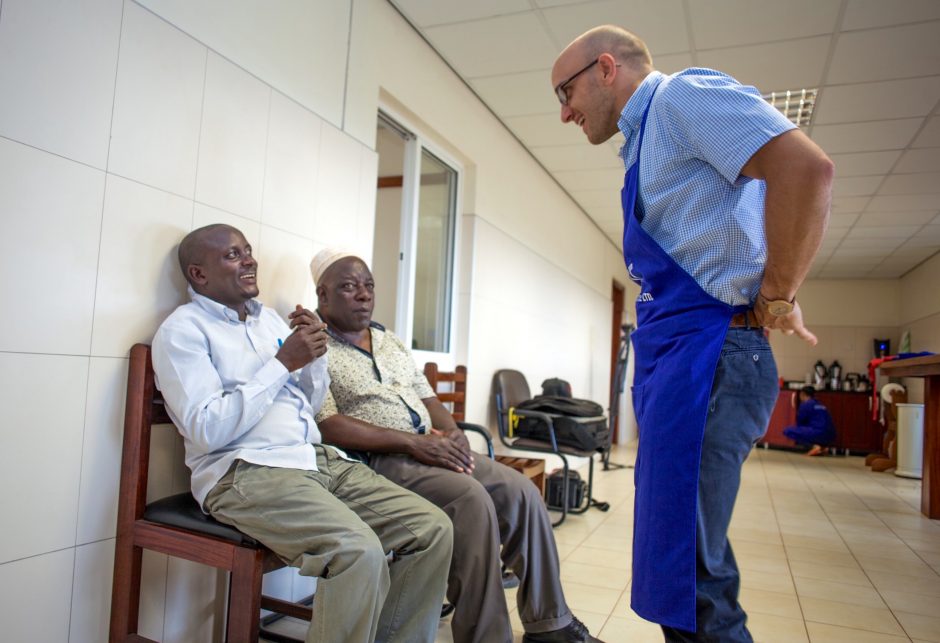 When our colleagues in Uganda describe our green coffees as some of the best to ever come out Uganda, they don’t say it lightly.

“We should be able to compete with Centrals,” says Matthew Seaton, referring to coffees from Central America. “I think if you put those coffees on a table with Centrals — blind—people will be shocked. And we’re just beginning! That’s what’s so exciting.”

Seaton is the general manager at Kyagalanyi (chug-uh-lonny), Genuine Origin’s sister company in Uganda. Before Uganda he was in Tanzania and before that Honduras.

“I’d never been wow’d by a Ugandan coffee,” says Seaton.  But soon after his arrival, he had a much-needed, head-clearing moment, while having breakfast with Alvaro Llobet, a senior agronomist and widely respected consultant to Volcafe. Llobet was visiting to survey the situation.

“Alvaro said, ‘The primary materials you have here are as good as anything we have in Central America. So why aren’t you getting the cups?’ When he said that, it gave me the confidence to really consider: What are we doing wrong? And it was the red cherries,” says Seaton.

Stopping by a soccer game, on a walk to the Kapchorwa washing station. Mt. Elgon’s rich, red volanic soil is on display everywhere.

“We were receiving maybe 80 percent red cherries at the washing stations, which was quite normal here, but the difference is massive. We had a parameter of 95 percent, but if you don’t enforce these things, that number doesn’t happen,” he continues. “So we put checks on that. We even take photos and share them on Whatsapp, amongst the washing station managers, to create a little fun competition around a key differentiator of quality.”

The parameter of 95 percent is now being enforced. When a farmer brings cherry to sell, a portion of the bag is counted out; if it’s not 95 percent ripe cherry, the farmer must step aside to a sorting area and re-sort the bag.

Seaton’s team also made a greater effort to drive home to farmers that red cherry weighs more than green cherry, so a bag of fully ripe fruit is worth more than a bag that includes under-ripes.

“We weren’t doing enough of practically illustrating that idea, but now we are. It’s the standard. Every time there’s a delivery, we’re showing people, showing people. And it’s working,” says Seaton.

“I understand there are cash-flow issues,” he acknowledges. “Many people are living day to day. If there’s a problem, they strip the trees and sell the cherries. We’re not going to change that. But at the margin, you can nudge decisions and create more value longer term. Hopefully they can begin to create a savings and not have to have that kind of rush decision. While it may be tempting to harvest two weeks earlier and have money in your hand two weeks sooner, you’ll make more money if you wait.”

Matthew Seaton, general manager at Kyagalanyi, GO’s sister company in Uganda. “We should be able to compete with Centrals,” says Seaton.

Seaton, who has a skill for surrounding himself with talented people, had a passionate young trader named Juan Jose Suelves working at the trading desk. Seaton sent him out to the washing stations.

“It’s easy, of course, to sit at a desk and give the stations a price and tell them what they should do. But it’s very different to actually understand their challenges. … Juan is a doer. While we talk, he does.”

Everyone’s efforts are paying off.

“I was extremely happy when we got scores back of 86, 87 on Gibuzale,” said Seaton.

Recently, Juan visited Kenya, and with the samples he brought back he prepared a blind tasting.

“I kind of picked out the two weakest on the table and identified them as the Ugandas. And I was wrong!” says Seaton, finally allowing himself a bit of pride in it all.

“I couldn’t believe how well they compared. ”

The challenge now, he said, is about “really changing perceptions.” He laughed. “Even mine.” •

Click here to order complimentary samples of Kapchorwa and Gibuzale.