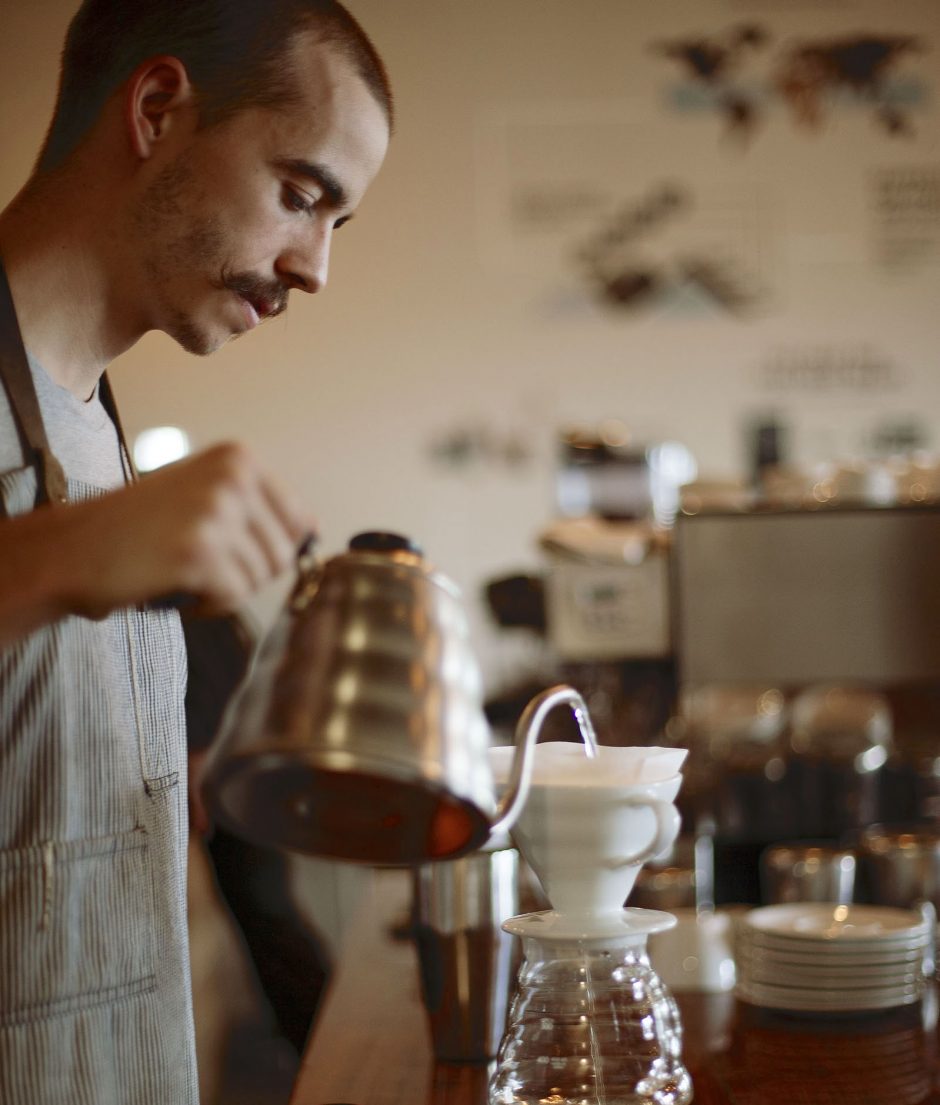 At The Abbey Coffee Co., Roastmaster Levi McClish is growing his coffee community beyond his small town —and encouraging others to expand their coffee horizons. On Oct. 21, The Abbey, with the Indianapolis League of Lattes, will host a Smalltown Throwdown with a grand-prize trip to Guatemala.

In 2012, Chris DeMarse began roasting coffee in small batches, in his garage in Marion, Indiana. It wasn’t a very popular or common pursuit. After sharing his coffee with encouraging friends, he felt compelled to bring specialty coffee — respectfully sourced and carefully roasted and prepared — to his community. Something about the effort, and the intentionality with which he went about it, felt monastic. In a nod toward that feeling, in 2013 he opened The Abbey Coffee Co.

“We’re doing really nice coffee in a great space, in a small town that otherwise has very few nice things,” says Levi McClish, now the roastmaster at The Abbey.

McClish began working in coffee six or seven years ago, as a barista, and became “obsessed” with latte art.

“That was my thing,” says McClish. “I was super dedicated to my bar work, and I was traveling on my own dime to competitions.” In small towns, with small populations, it’s a way to meet people with common interests, he explained.

“I started going down to Indianapolis, to places like Bee Coffee Roasters, and doing throwdowns. Andy Gilman at Bee started the Indianapolis League of Lattes, a monthly throwdown league, and I made a lot of friends through that.”

Eventually, says McClish, “my employer saw my dedication and offered me a roaster position. I apprenticed under Chris DeMarse for four months.”

McClish still does some consulting work, “with milk texturing and espresso,” helping baristas.

“That’s my angle,” he explains, “trying to do something for people who are usually stuck on bar, giving them skills to help them further their careers.”

Last year, McClish and The Abbey played host to their own throwdown.

“There were four baristas from my county, and people drove from all over Indiana to get here. It was great.”

On Saturday, October 21, they’re doing it again — and even bigger.

The Abbey Coffee Co. has teamed up with the Indianapolis League of Lattes and will host Smalltown Throwdown, a competition tied to more than $2,000 in prizes.

The Grand Prize, we’re thrilled to share, is a trip to visit the Genuine Origin team in Guatemala, Feb. 4–8, as well as the buy-in cash pot and some great swag.

“GO is pushing this thing to a whole ’nother level,” says McClish — who has, with characteristic attention to detail, put together what’s sure to be an outstanding event.

If Marion, Indiana, is near your part of the world, we warmly encourage you to head over. You can register in advance here — or on site that evening, from 6:30–7 p.m. (Folks from Ohio, Michigan and northern Kentucky have already registered — advanced registration is recommended.)

The Abbey and the League of Lattes proudly present: Smalltown Throwdown.

Food trucks will begin arriving at 6, and the main event and first pours will kick off at 7:30.

“I love my coffee friends and I love putting on a good party, building community and introducing the weird coffee culture that I adore to new people in my town,” says McClish.

“Last year, Smalltown Throwdown was a chance to put on a party with awesome coffee friends in an unlikely location,” he continued. “What it’s becoming, thanks to partners like Genuine Origin, is an opportunity for hardworking baristas to get a leg up in their careers. We want to prove to people that all their time spent practicing their bar skills can pay huge dividends and open up a world of exciting experiences. I can’t wait for the 21st!”•

—
Smalltown Throwdown will take place Oct. 21 from 6–11 p.m. Throwdown participants can register in advance at this Eventbrite site, run by The Abbey. The dates of the visit to Genuine Origin in Guatemala are Feb. 4–8 and are inflexible. If the first-place winner is unable to attend, we’ll extend the invitation to the second-place winner.