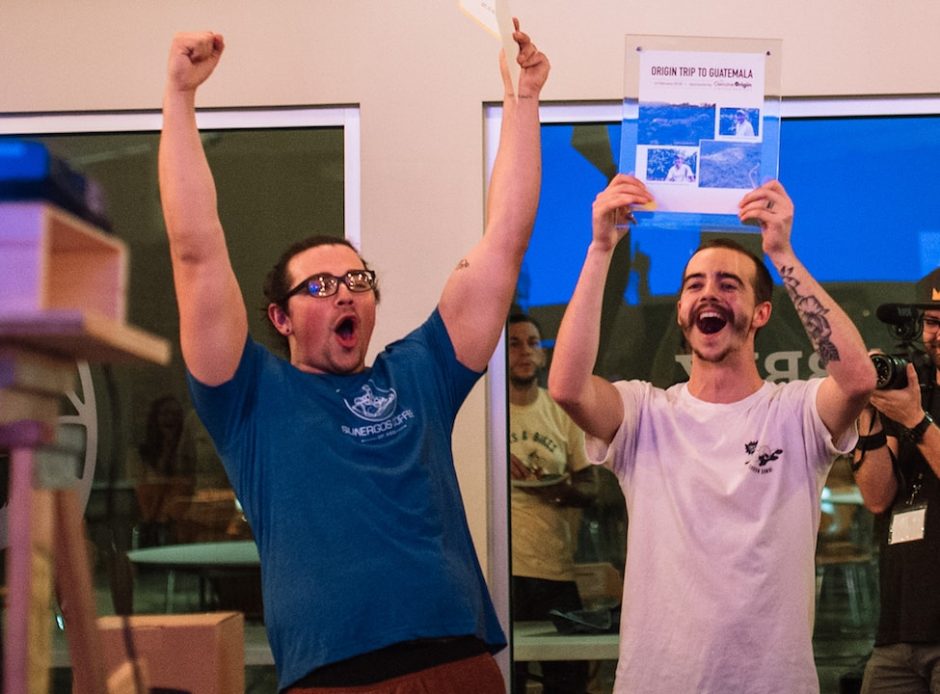 “It was a pretty good weekend,” said Lance Hedrick, lead barista and manager at The Hub, a new specialty coffee shop in Memphis.

On Saturday, Oct. 21, The Abbey Coffee Co., in Marion, Indiana, hosted a Smalltown Throwdown, which Abbey Roastmaster Levi McClish (pictured above, right) described as “an opportunity for hardworking baristas to get a leg up in their careers.”

First prize was the buy-in pot and a trip to visit the Genuine Origin team in Guatemala.

Another throwdown was planned for that Friday in Columbus, Indiana, and Hedrick and his wife decided they were game for a weekend away. So they packed their 6-month-old son into the car, headed off on an 8-plus-hour road trip, and came home with both prizes.

Lance Hedrick won first prize at The Abbey’s Smalltown Throwdown. “It was a pretty good weekend,” he said.

Earlier in the month, Hedrick had flown to San Diego to compete in a Slayer Espresso throwdown and took home its $5,000 first prize. And last June, he won Coffee Fest’s Latte Art World Championship Open in Chicago.

“It was fun,” said Hedrick. “There were some people there that I was excited to meet, like Ross Bemis from Coat Check Coffee, who’s someone I followed on Instagram for a while. He’s really talented.”

Hedrick says his winning pours are variations on tulips.

“I like a nice mixture of complexity and simplicity,” he explained. “I know that sounds paradoxical, but whenever people say complex tulips, I think people kind of go over the top. They’re trying to do like 15 different drops in to the cup. Then, when people say simplistic, they’re talking about like maybe three drops in the cup. I like that nice middle. I do like maybe five or six drops into the cup. I do a decent amount of lineage in there, I try to get some nice spacing, I focus heavily on symmetry. So, yeah, every round is something different.”

Lance Hedrick and his wife packed their 6-month-old son into the car, headed off on an 8-plus-hour road trip, and came home with two top prizes.

Even with his pours figured out, competing is stressful.

“The biggest thing that kills people at these competitions is the shakes,” he said, explaining that it’s important to prepare for the stress while you’re still at home in your shop.

“The best advice I ever got was from a guy named Maxwell Mooney, out in Seattle. He told me to drink like four or five double shots of espresso right in a row, and practice while you’re shaking from over-caffeination. Because, if you can pour while you’re shaky, you’ll have a better shot of winning. It’s the people who don’t know how to pour while they’re shaking that are gonna do poorly.”

He laughs. “At first, I thought he was messing with me. But he was completely serious, and it helped me a lot. Especially in the first eight or 10 throwdowns I was in.”

While Hedrick has made plenty of trips to the winner’s podium, he hasn’t yet visited a coffee origin.

“This is dope. It’s one of the coolest prizes I’ve ever heard of,” he said, adding that he’s hoping to see coffees processed in different ways: washed, natural and honey.

“I’d love to actually get to touch a lot of the processes. Like, get my hands into it. I’m really excited about that — and about meeting some of the people who are producing some of these coffees, and putting faces to the names.”

Hedrick’s own coffee origin story started out as a favor. He was in a Master’s program, about to propose to his now-wife and in need a flexible job; a dean at the school was on the board of a non-profit coffee shop in town and said the shop would work with his schedule if he got the job.

“This was in really rural Arkansas … I started to get into latte art because we had to be able to pour a heart or simple rosetta to work on bar. The manager was pretty impressed at how quickly I picked it up and pushed me to keep developing. It was kind of fun. After about five or six months, I started using Instagram and was able to see different styles of pouring from around the world, which was mind blowing.”

Until then, the only people he had seen pour were the baristas he worked with.

“It opened up a world of possibilities. I started to watch these videos, late into the night, and I just practiced. Every drink I poured I would try something new, something different. … I got super into it.”

And then the café’s coffee improved.

“We started featuring Onyx, since they were an Arkansas roaster. I had my first cup of specialty coffee there, and it tasted like blueberries. At that point, it was like, ‘Oh my goodness. Coffee is what I want to do.’ And, it really is enough of a cutting-edge field of study that I can utilize my academic background and research capabilities and funnel that toward coffee.”

Still, academia tugged at him. Last year, he travelled to England to interview for doctoral programs in philosophy and politics. (He was accepted.)

“For the first time ever, I got to experience the coffee community at large.”

“But on my flight back, I competed in my first world championship in New York,” said Hedrick. “For the first time ever, I got to experience the coffee community at large. I met people from around the country, from around the world. And that, in tandem with my budding latte-art abilities and growing fondness for specialty coffee in general…” He pauses.

“I had those contrasting experiences and decided, for the time being, to pursue coffee. As of now, I definitely do not regret it.”•

Our thanks to The Abbey and Erin Lea Imagery for the photos!