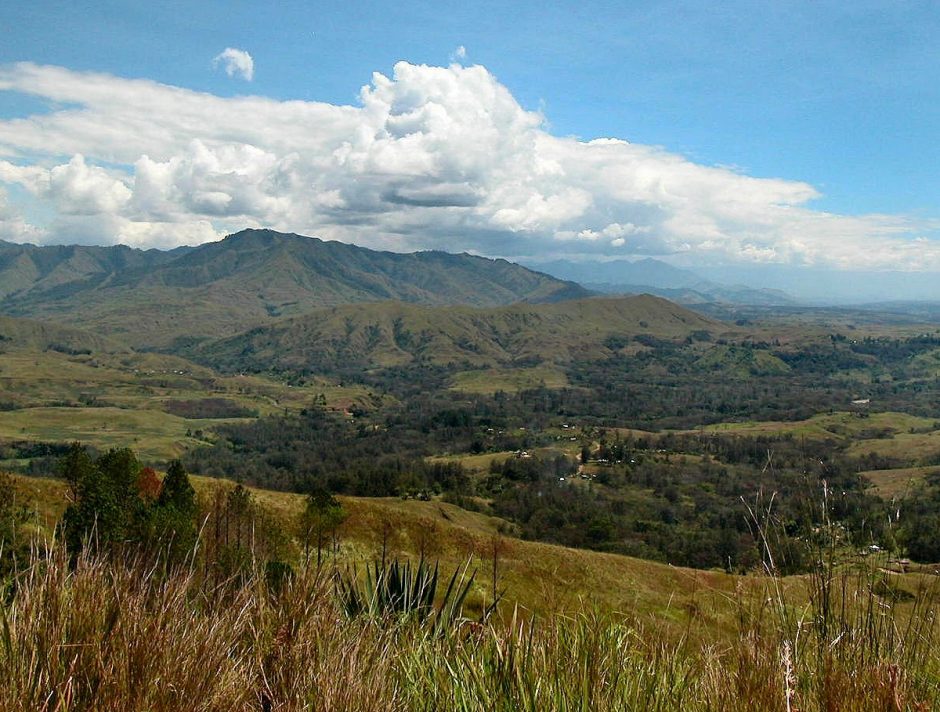 Papua New Guinea sits on the “Ring of Fire,” a basin in the Pacific Ocean where scraping tectonic plates trigger earthquakes and volcanic eruptions. Centuries ago, volcanic activity transformed the Jiwaka Province’s Wahgi Valley — the floor of which sits at 1,500 meters above sea level — from swampland into fertile farm land. This beautiful, stunningly diverse region is the source of our two newest coffees, Marenban Estate and Kiam.

While they grew roughly 10 miles apart, and both capture the sweetness, bright aroma and strong acidity the region is known for, their stories are the passion projects of two very different men — both of whom it’s our real pleasure to work with. We asked Jon Edwards, the general manager of our operations in PNG, for the details.

“Anjip Mare started out as a coffee buyer as a young kid, and over the years he became quite successful,” says Jon Edwards, general manager at Papua New Guinea Coffee Exports (PNGCE), Genuine Origin’s sister company in PNG.

Mare (mar-ay) had a truck and would drive around buying coffee cherry from farmers, a common practice in PNG. In 1975, PNG achieved independence from Australia, and a few years later the new government began changing laws, to prevent foreigners from owning land. This left many plantations abandoned, including Marenban Estate — formerly one of the elite plantations in the Wahgi Valley. 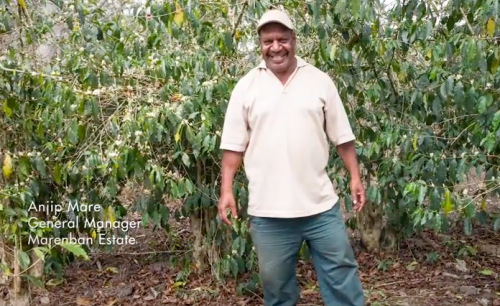 Anjip Mare is returning the elite Marenban Estate to its former glory.

“Anjip reached a point where he’d saved enough money and decided to buy his own land, which he did with the consent of all the people in the area who were involved in working sections of the plantation,” says Edwards. “So the plantation is worked by the various people who also feel they have a claim to the land.”

Mare brought the estate back to life, re-placing trees on approximately 120 of its 200 hectares.

“It was overgrown — it was like the bush. And he’s done a lot of work through engaging local groups,” says Edwards. “It’s not to its former glory, but he’s on the way there. He’s done a lot of replanting, and he’s done it with the help of the people.” Who are also proud of the turnaround.

“They get a lot of benefits from it, certainly, because they are able to live on the land and they get paid for what they do,” Edwards explains. “But yes, they’re a part of the success and they feel good about that.” 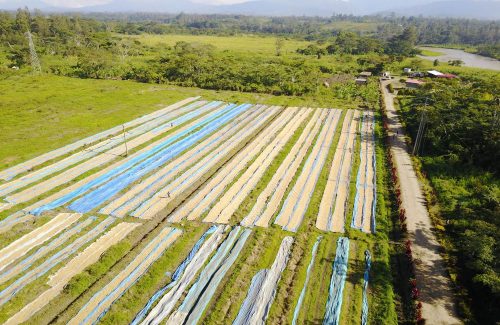 Sun-drying coffee on the Marenban Estate.

Coffee from Marenban Estate, says Edwards, is very representative of the area.

“It’s quite full bodied. It’s got good acidity. It’s sweet. And it has very nice citrus to it.”

Kiam comes from just few miles from Marenban, in an area called Banz. It has very similar soil type, and cherry is abundant in the area.

“Kiam is a word related to where you’d go to sharpen a knife — flint,” says Edwards. 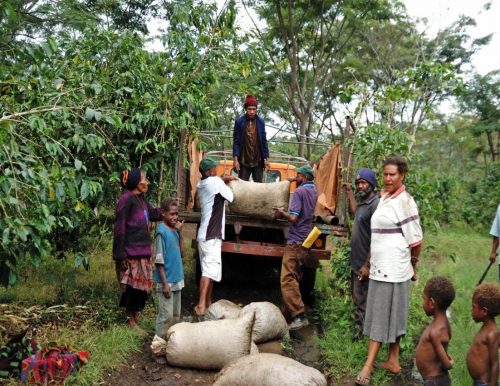 Buying coffee cherry (above and below) from smallholder farmers around Banz, to process at the Kiam wet mill.

While our Marenban refers to the estate, Kiam is actually the wet mill, which receives its cherry from the farms and gardens around Banz.

“Kiam is a very well-run wet mill, with two four-disk pulpers, very large vats for fermenting the coffee and enormous patios — approximately 11 hectares — where the coffee is put out to dry in the sun.”

It’s run by Paul Pora, whose coffee resume includes owning and running his own plantation, as well as roles at the World Bank and Coffee Industry Corporation.

“Paul Pora is quite a character in coffee,” laughs Edwards. “He’s done a lot of things. He’s worked in various parts of the industry and in some very senior roles. He also a degree in anthropology from, I believe, Oxford, as well as a degree in genetics,” says Edwards.

Coffees from the Kiam mill have similar flavors as Marenban Estate’s, though they tend to be a little lighter in body than the Marenban.

Edwards and his team have been working with producers like Mare to help improve their outcomes. In 2018, a full Volcafe Way effort will be put into place, to offer more holistic advice to farmers, to help them better manage their farms and trees, improve their coffee quality and gain more control of their financial strategy. Often, farmers sell what cherry they have but don’t apply a business mindset to the effort, or even a long-term mindset. Small changes they make can have meaningful impacts.

“It’s going to take years to develop, and some time for us to see the results of the work,” says Edwards. “But I’m quite confident that if we approach it with enthusiasm, the farmers will respond to that and we can pull it together successfully. It’s a challenge, but it’s the right way to go. •

Holding Fees, Carry Charges and Other Things We Don’t Do