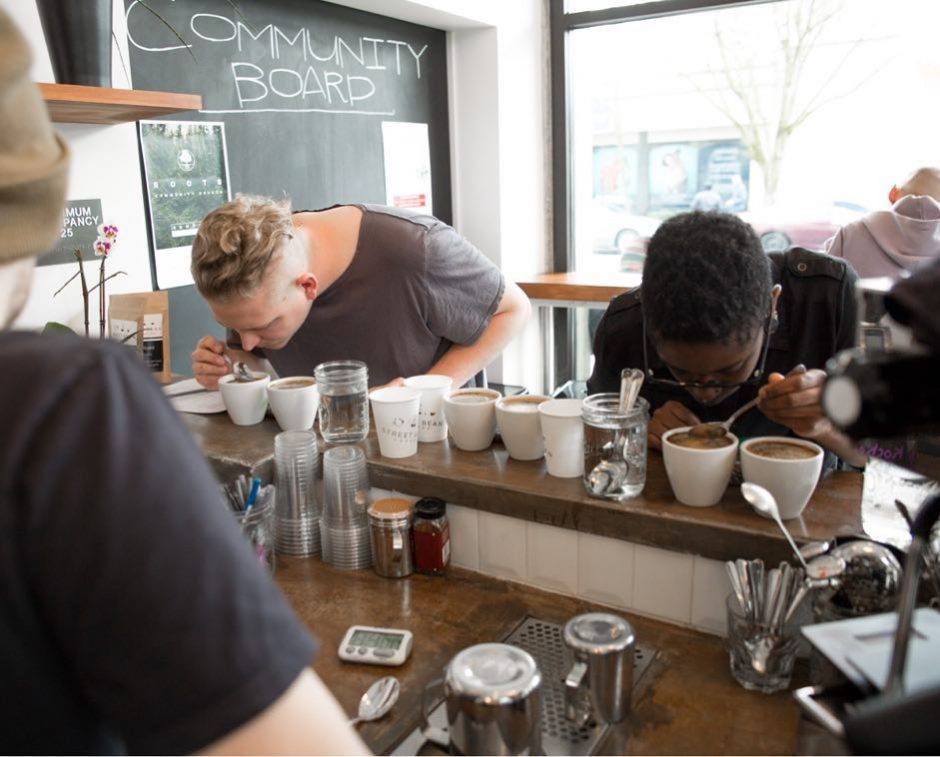 It’s a reference to the Seattle specialty shop’s missions: to offer delicious, expertly sourced, roasted and brewed coffee; to use coffee as a bridge to isolated aspects of its community; and to help street-involved youth to transition to successful futures.

Set up as a nonprofit, Street Bean employs and trains young people to be baristas, focusing on hard skills like brewing techniques and drink development, as well as soft skills like conflict-resolution, self-governance and problem solving. And, it helps them to transition to coffee jobs beyond the shop. Every bag of coffee that Street Bean sells funds one hour of job training for an apprentice.

“We don’t have any firm partnerships or placement relationships right now—that’s something we’re working on—but we take them on field trips to coffee shops in the area, and we talk to the managers and whatnot about the possibility of bringing them on,” says David Clark, head roaster at Street Bean.

One apprentice was recently hired by Zoka, a Seattle shop, and another alum found work at Cherry Street.

“Unlike many of other programs, we pay the folks in our apprenticeship program,” says Clark. “They get paid minimum wage, at the very least, and they get help developing a budget for their personal finances, and they work on things like getting into college or getting their G.E.D., if they don’t have that. So, more than a coffee job it’s like a life-skills apprenticeship.”

The program was founded by Linda Ruthruff, who had been working at New Horizons—a Seattle non-profit that likewise helps street-involved kids on their journeys toward sustainable, successful futures—and wanting to create a business that could employ young people.

Street Bean Espresso opened in 2009, partly through the generosity of a New Horizons neighbor, who offered a few months of free rent in a great retail location, to help get Linda’s business plan off the ground. It 2015, it began roasting and hosting roasting apprenticeships and changed its name to Street Bean Coffee Roasters.

As much as the team has taught its apprentices, they’re learning just as much, says Clark.

“I’ve learned a lot about what it means for some young people to come in and just, like, have somewhere to be. To have some responsibility. A lot of them are really thankful for that. So many of us take the idea of work for granted. But a lot of them don’t care as much about the paycheck as having a place to be and having people to talk to who don’t talk down to them.”

Street Bean, as a fairly young roaster, has also been finding its way.

“At the beginning of my tenure as head roaster, we were locked into a contract with way too much coffee, more than we could handle, so we had to dig out of that,” says Clark, who’s been head roaster for approximately nine months now.

“The amounts ordered were also not planned for specific dates at which they could be rotated out, so there were gaps to be filled as we tried to cycle out those coffees in creative ways. That’s where Genuine Origin came in. It was the perfect find at the perfect time. We could order just one box of several coffees, but also order more of others.”

Since then, Clark has settled on a short list of importers he works with, and GO is one of them.

“I’ve really focused on quality and maintaining quality and roasting fresh coffee. In the time I’ve been here, we’ve gone from roasting really large lots of coffees to focusing more on small lots. Which is super important for us. We want to be able to show our apprentices that we can have an almost direct impact throughout the entire chain of the coffee’s journey.”

Buying and roasting smaller lots and offering a great selection also has its challenges, but in the best way.

“We production roast on a 10 kilo, but we’ve got a 1.5 kilo back in one of our shops and I’ve learned how to roast 200-gram batches on that, so that was fun. It took a couple weeks to hone that in, but now it’s an invaluable tool,” says Clark.

“I’m always learning, and it keeps all the baristas on their toes, too,” he continues, “so I have to be sure to send out very detailed emails about what our new coffees are and things like how I think they might pull an espresso.”

And of course, the apprentices are drinking it all in.

“It takes them a little bit to realize that there’s more to coffee than what they thought before,” says Clark. “But a lot of them get really excited when they figure that out. Some of them, when they first start, are like, ‘Why do you work at a coffee shop?’ And it’s like: Yeah, you’ll find out.” •