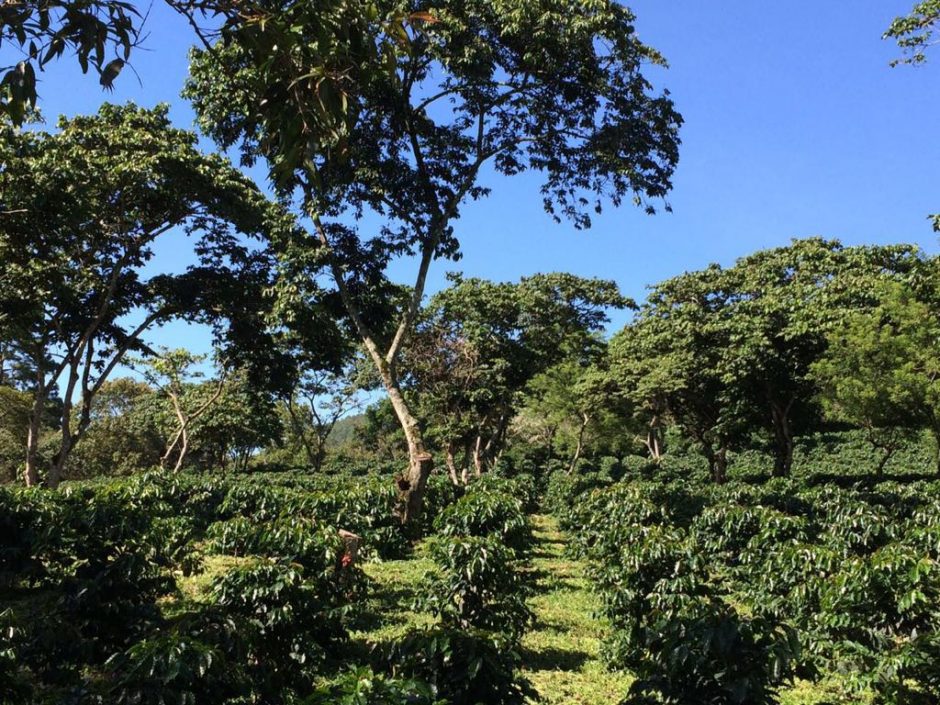 Coffee roasters have fallen in love with our Colombia Nariño, so we’re particularly excited to share that in February we’ll have its neighbor to the north, Colombia Huila Garzón.

Huila is nestled along the eastern borders of the Cauca and Tolima regions. In the World Atlas of Coffee, James Hoffman writes that Huila has “a combination of great soil and great geography for growing coffee, and some of the most complex, fruit-driven Colombian coffees I have tasted have come from here.” 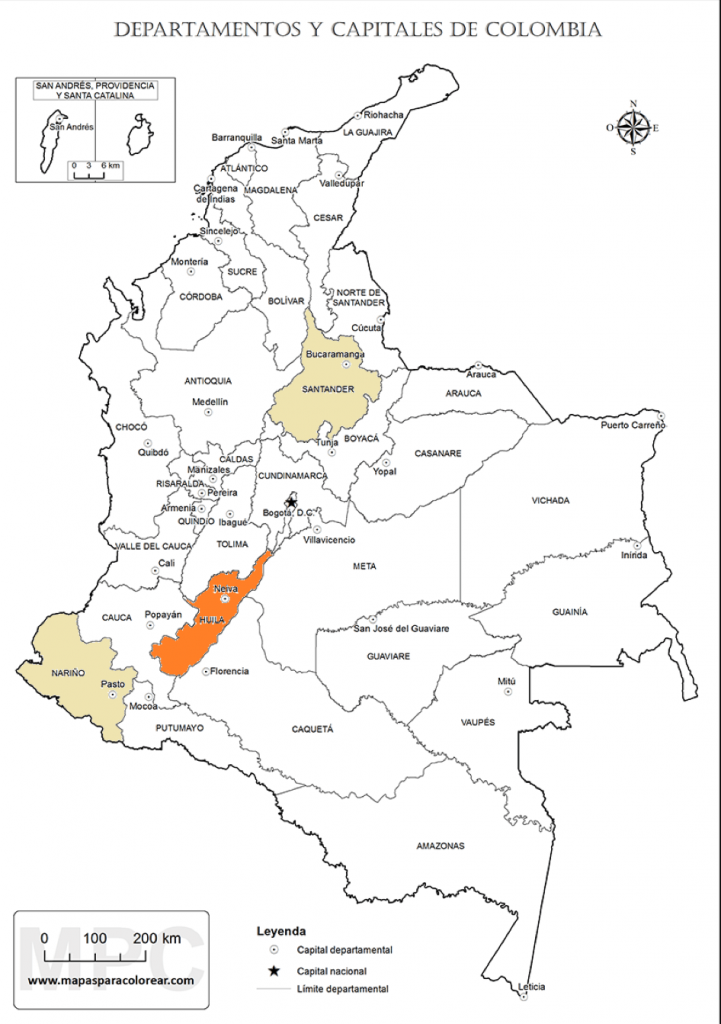 The department of Huila is north of Nariño and south of Santander.

Unlike in Nariño (to its south) and Santander (to its north), Huila enjoys two harvests each year. In much of Colombia, the main harvest is November to January, and the fly crop, locally known as the mitaca, arrives from April to June; in Garzón, however, it’s the reverse, and this coffee is from its mitaca. It’s sweet and clean, with a round body, citric acidity and notes of Meyer lemon, chocolate and cherry.

Volcafe Way has been very active in Colombia, and we recently asked Juan Rada at Carcafe, our sister company in Colombia, about the impact Volcafe Way has had there. Producers are used to being offered advice regarding compliance with coffee certifications, he said, so Volcafe Way was easily received. A key difference that it’s made, he explained, is that more producers are now thinking about consistent productivity and planning for the long-term health of their farms.

He offered the example of producer Leonte Cardoba Carvajal’s farm, El Corozal, which is one of 36 farms that contributed to Genuine Origin Huila Garzón.

Juan told us the story below, translating from the Volcafe Way agronomist in Garzón. 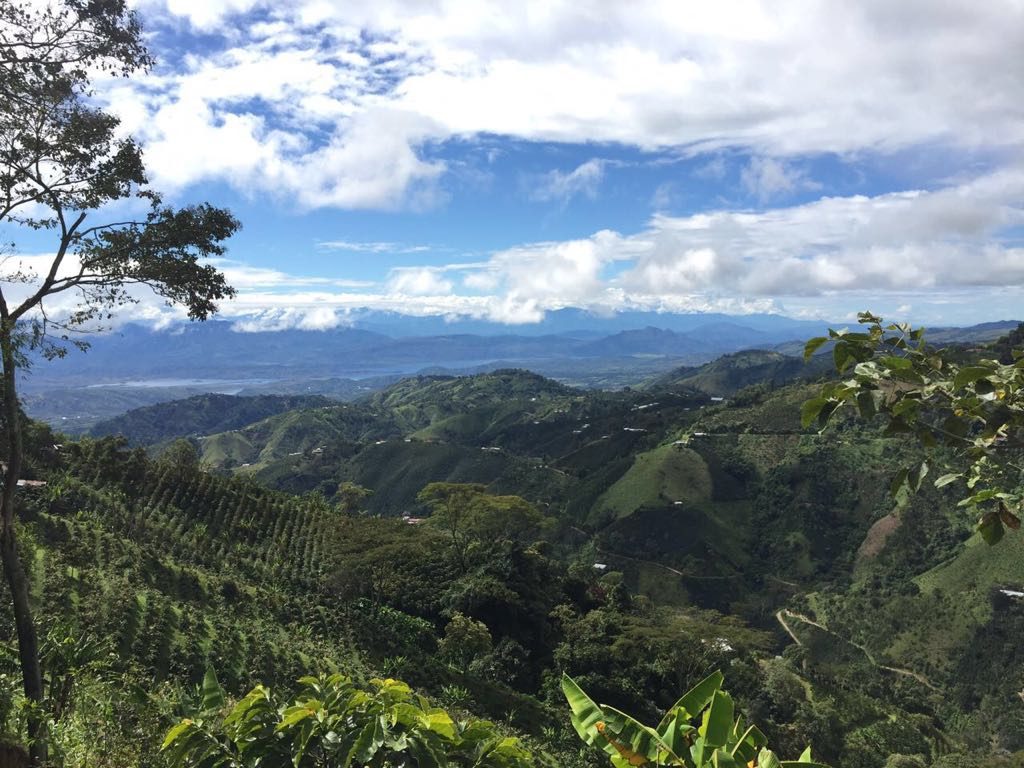 “The farm name is El Corozal, which means the land where corozo palm trees are abundant. It’s a type of palm with fruit that can be eaten.

The farm was received by Mr. Carvajal (Leonte’s father), during the Colombian Agrarian Reform (in the 1960s), in which the Colombian government modified the land ownership, distributing huge unproductive land extensions from wealthy families to small farmers. At the time, the farm was 9 hectares.

Leonte’s father began cultivating coffee on the small piece of land he received, and as this land was originally forest, he tried to keep as many of the native trees as possible. During the ’80s, however, part of the technical advice he received from some organization was to give coffee 100% sun exposure to increase productivity. Several native trees were cut, but he kept the ones around the water sources as a preventive measure to avoid the streams from going dry.

By nature and the initiatives of their father, Leonte and his two brothers grew up with a dedication to caring for the environment and the wildlife on the farm. While the kids in the area had fun using their slingshots to kill and capture birds, Leonte and brothers were not fans of such things.

Time passed, and Leonte’s father passed away, and the sons inherited the farm. Under usual circumstances, the siblings will divide a farm to make a profit from each part. However, they made a smart decision: They decided to keep the farm together and manage it as a business unit in which each sibling would have a specific responsibility, according to each one’s abilities.

Thanks to this joint effort, they have been successful, and they’ve been able to buy some neighbors’ farms, so El Corozal is today a farm of 20 hectares, of which 17 are fully dedicated to coffee. The remaining 3 hectares are preserved native forest that they have been keeping since their father’s time.

They are thinking in the future, and despite difficult times with internal prices, they trust that coffee will be the tool for their development in the future (in the same way they got their education from their father). Today, Leonte’s son is studying in the Garzón municipality to be a barista and a cupper.

Because of the way they have been organized as a family/business unit, especially with the bookkeeping part, they were easy adopters of the Volcafe Way’s suggestions. Especially things like reviewing their incomes and expenses to better plan for the future and keeping the coffee to around 7 years old to get the optimal productivity, year after year. That means that each year, despite internal prices, they must renovate from 10% to 15% of the farm. This renovation can be done through different pruning practices they can choose from: skeleton prune, lung prune, Colombian prune (stumping) or new plantings. The options are provided to them by the method, and they’re very disciplined and dedicated.” •

Huila Garzón will be available for pre-order in the coming days, and boxes will be in the store in mid-to-late February.