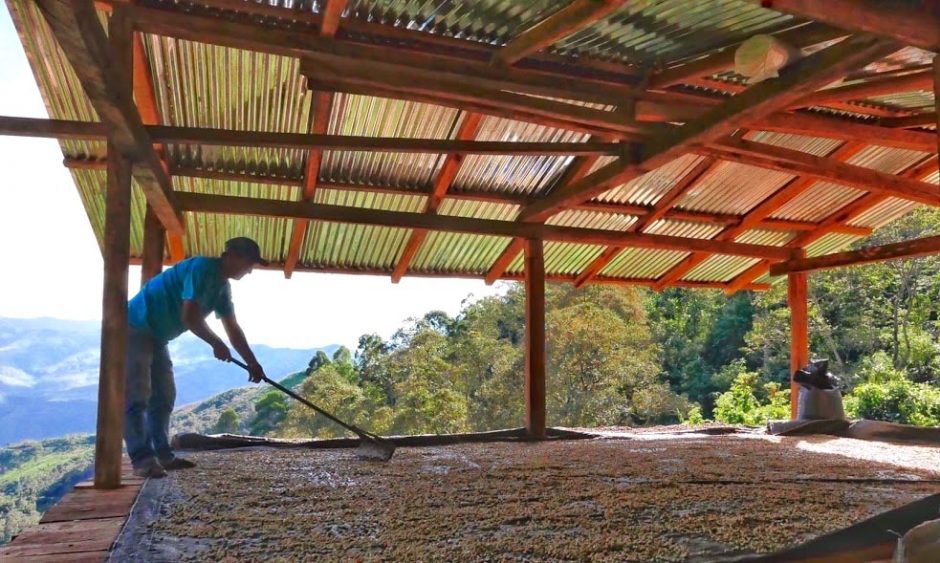 “You can easily have coffee all year round,” says Roberto Ortiz with Prodelsur, Genuine Origin’s sister organization in Peru, referring the growing abundance of coffee in the country, particularly as farmers gain access to new resources.

“When the producers started becoming more technical in their practices, everything started to change,” says Ortiz. “It’s like having a well-fed baby. When you give the baby the right food, it starts to grow as it was meant to.” 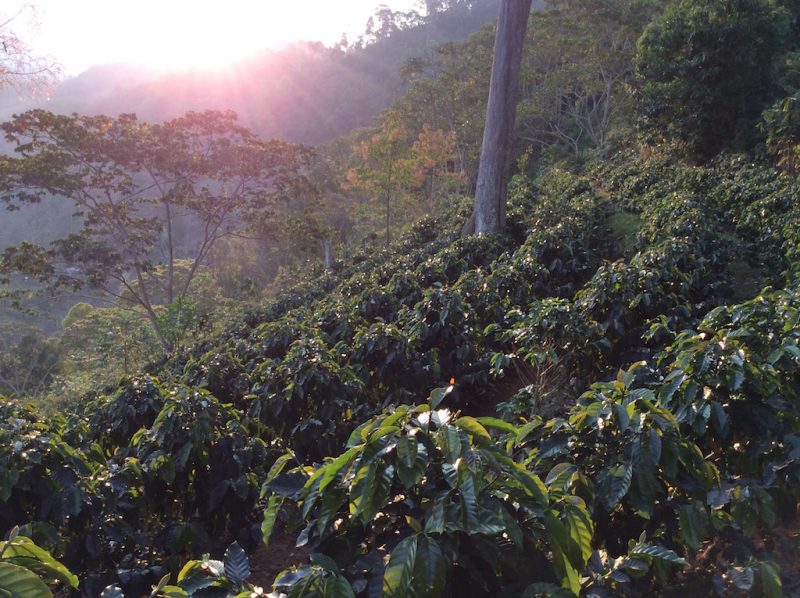 A coffee farm in Cajamarca, Peru.

“We have been working with the Capili producers for six or seven years, and they are three of the best-organized communities that we buy coffees from,” says Ortiz.

Originally, he explains, the Capili producers were from Chonta and Cutervo, to the north — two areas with a focus on livestock and potatoes. Eventually, looking for opportunities, they began migrating to Cajamarca and La Capilla, and a generation has farmed sugarcane for yonke (pronounced jon-kay), a sugarcane liquor.

“As an agronomist, it’s pretty awesome to see sugarcane being cultivated at, say, 1,800 meters above sea level,” says Ortiz. “Usually, sugarcane grows in the lowlands, in hot areas. But these producers have a strong lineage to the Incas, and they are experts at adapting different crops to different habitats. It took a little while, but they had these varieties that were ideal for yonke, and they made them absolutely flourish, high in the mountains.”

Ortiz acknowledges the inevitable jokes that comes with such a product.

“Sure, they have a drink, but there are rituals to it. They will have a drink together at the end of the work day. It’s similar to a Colombian aguardiente. It’s very fruity. It has a high amount of sucrose, thanks to the rich soils from La Capilla. It’s thin and sweet and one of the fruitiest aguardientes I’ve had in my life. And there’s nothing in it but sugarcane. It just has to do with the variety they cultivate.”

The drink undergoes a very quick fermentation process of just a few days, after being pressed in a trapiche —a kind of mill to which oxen are strapped and walk around in a circle, pressing down the sugarcane. Which is a process that comes with its own traditions. 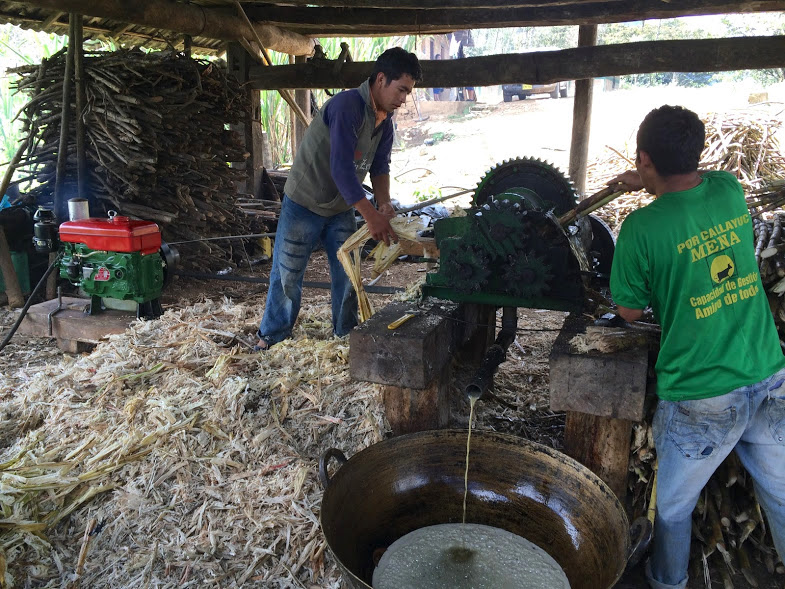 The alternative to a trapiche: Pressing sugarcane for yonke, a liquor that many Cafe Capili producers still make as a hobby or for a second income.

“On a Sunday or Saturday, the mothers cook, people gather and the men cut the sugarcane and start pressing. Everyone has a good time. This tradition will never go away,” says Ortiz, even as yonke becomes a hobby, or a distant-second cash crop, as the producers focus more on coffee.

As Peru has become more de-centralized, and beer and other spirits from around the world have become more available, the market demand for yonke has softened. Coffee presented a new opportunity—and a more profitable one.

“At first, they dedicated just small areas of their farms to coffee, trying it out. And they were amazing about implementing a new crop. I have never seen a district adapt so well to coffee and adopt the Volcafe Way practices so fluidly. They’re incredible farmers and this culture has very disciplined leaders,” says Ortiz.

“It blew our minds when we bought the first parchment from them. It was such a floral cup, and the amount of sweetness you can get from these beans is remarkable,” Ortiz continues.

“Genetics are a huge part of the quality pillar. You can have pure varieties, like pure Arabica varieties that have been there for decades. And often you see producers going crazy looking for the newest varieties. But when we work with an established variety like Typica and Bourbon, we have seen a pretty awesome difference, in terms of the cup. These varieties are pretty well adapted, especially when you’re working closely with producers, helping them reach the highest potential that a plant can give you.”

He continues, “There are rumors that Catimor is not always a great cup. It may be in some cases a bit inferior to Bourbon and Typica. But I believe this blend that Capili gives us is just sensational. It’s probably one of the best in the country.”

The producers are also much more financially stable now, producing coffee, than they were with yonke.

“The clearest parameter we have of this is seeing the changes to their housing conditions and the better conditions they’re creating for their children,” says Ortiz. “Often, the dream is for kids is to go to the coast and go to university, and this has been happening. But they’re also tight, emotionally, with their lands. Our hope, and their hope, is that the next generation is involved in coffee as well, even as they fulfill their dreams of becoming professionals. And we see already this happening.” 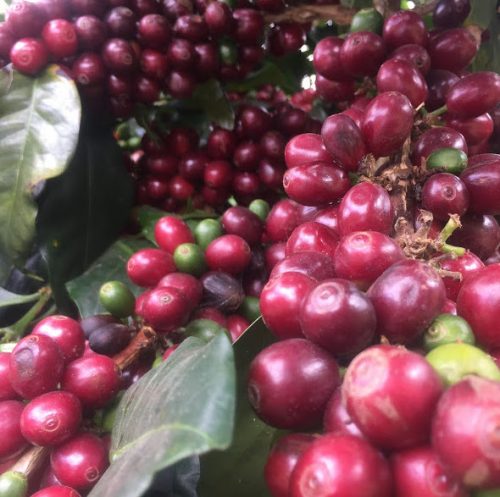 When Ortiz and his colleagues created the Chasqui lot for Genuine Origin, combining coffees from around Peru, they decided to give it a name that would honor the country and its heritage.

The coffees from Cajamarca and San Martin, provide a “subtleness and elegance” to the Chasqi, says Ortiz, while the lots from Junin add chocolate notes and a velvety body.

How does this cup compare to the Capili?

“Capili has a very clear acidity and is very clean. It’s also complex and balanced, with some spicy notes. And, you can taste the panela, the sweetness from the sugarcane,” says Ortiz. “It’s a distinctive cup.” •

Samples and boxes of Chasqui and Cafe Capili are now in the store!