The price of Green Coffee generally gravitates around the regulated futures exchanges which, for both Arabica and Robusta, used to operate with real-live humans in New York and London respectively but now exist virtually! 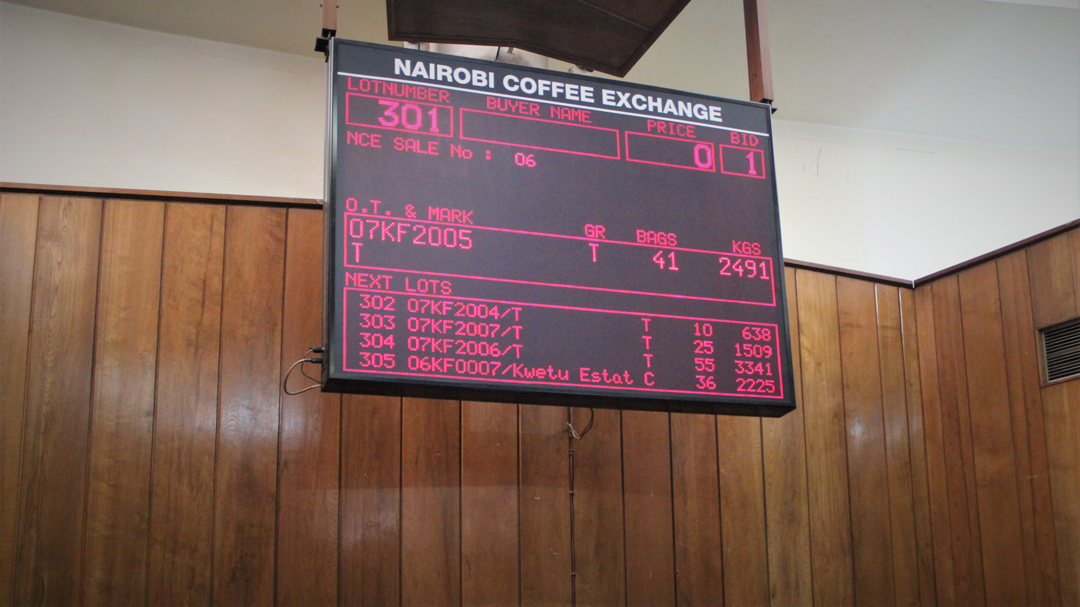 Coffee pricing board at the Kenya coffee exchange

Many thousands of market participants, some of whom are actually involved with the physical commodity, but most of whom are not (other than as coffee drinkers), ensure that the futures markets maintain liquidity — i.e., at any one time, there are buyers to match the sellers — and the yearly traded exchange volume exceeds physical coffee consumption many times over.
The futures markets are used by physical coffee participants (coffee producers, traders and roasters) to manage their price risks and to act as a ‘sponge’ — soaking up excess production or releasing stocks when fresh beans are scarce.

The markets are also used by managed money and speculative funds seeking returns on capital. Within the last 30 years the total value of funds seeking investment returns has grown exponentially, and a very small percentage finds its way into the coffee markets.

“One of the main purposes of the future markets is to serve as a hedging mechanisms for producers,” noted Mauricio Jimenez, General Manager at Genuine Origin. “The reality is that, even in the 21st century, over 90% of the producers don’t have the means to hedge their price risk due to economies of scale, liquidity needs and misinformation.”

Over time, futures markets come to reflect the basic underlying economic principles of supply and demand, but often with spasms of price volatility which can be caused by disruptive shock events (eg — a frost in Brazil) resulting in large price swings in both directions as shown in the below chart.

Unlike oil, coffee supply cannot be turned on and off like a tap. Periods of higher prices attract additional investment into production which generally takes two or more years to realize, resulting in a time-lagged price cycle which, together with natural on — off crop cycles, can accentuate market swings.

The evolution of the regulated futures exchanges and its widespread use as a price risk hedging instrument for the commercial actors in the trade — ie. producers, traders and roasters — resulted in the development of the green coffee price differential — simply put, the difference between the outright price of the physical coffee to the underlying worldwide price indicator (the Arabica and Robusta futures exchanges.).

The differential price is also expressed in US cents/lb for Arabica and in USD/MT for Robusta. Differentials are quoted by physical trade participants through their offer lists, for nearby and forward positions, and the expected difference between the highest and the lowest quote reflects the different costs and opinions from the various actors. 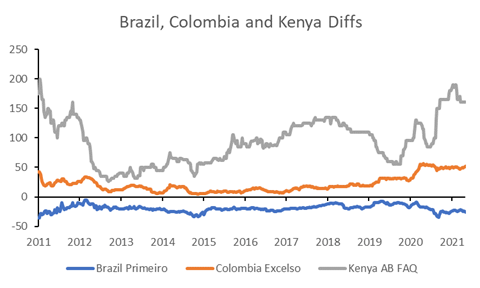 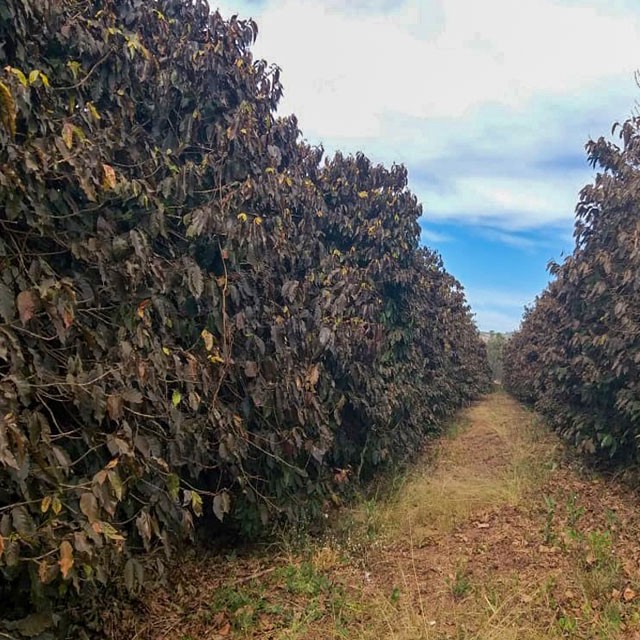 To summarize, the final price of any green coffee consists of the sum of:

Both can be volatile, although it is generally accepted that, for most coffees, the differential price changes less frequently from day to day.

In these weeks following the frost in Brazil, no better time than the present to reflect on the price movements of the last 40 years — and their underlying reasons — to appreciate the historic challenges at both ends of the coffee value chain.

Looking back at the history, severe climate events such as frost and drought across Brazil have led to significant coffee price increases. The recent events are no exception. However, the current price situation is more complex and unique extending beyond Brazil, we can’t recall a similar situation with the current combination of events happening in the past:

The futures price exchange reacts to the events effecting supply and demand, especially in the world’s largest producing countries. When the supply outlook is below expectations or simply disappointing, underlying prices appreciate. While the frost in Brazil has come and gone and the damage is more or less evaluated, the coffee market is heavily dependent on good flowering across Brazil to compensate for the upcoming Mild Arabica deficits. With so much uncertainty and weather playing such a key role, coffee prices will almost certainly remain firm and very volatile.