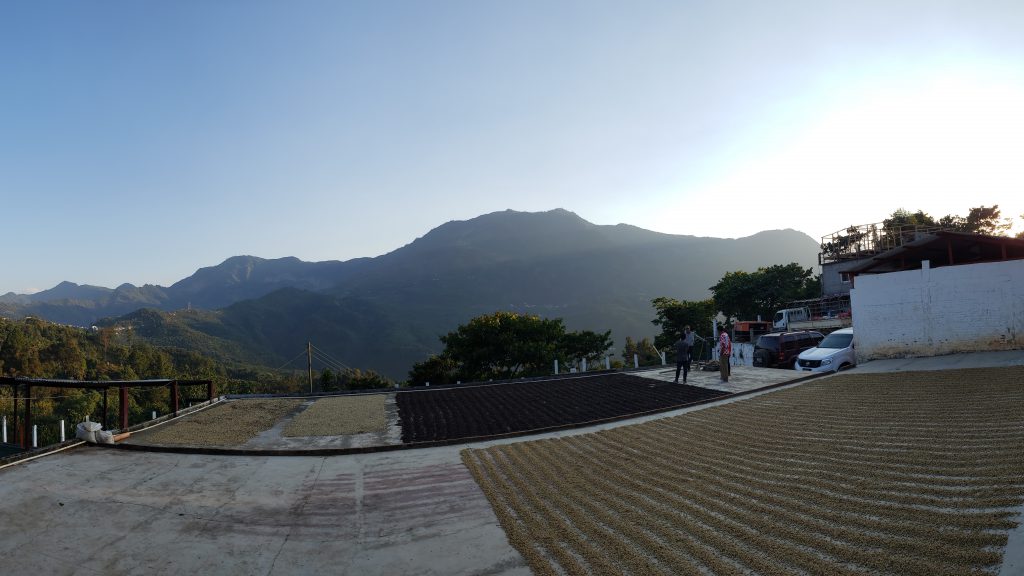 The 2021 harvest season in Guatemala came to a close earlier this year with some hurricane-induced delays, but also with exciting improvements in yield and cup quality. We received an update from our sister company, Volcafe Guatemala, about what they’ve been experiencing on the ground recently.

Last year, Guatemala was hit by two hurricanes at the beginning of the harvest season in November, displacing people across 21 municipalities in key coffee departments like Alta Verapaz and Huehuetenango. Eta and Iota destroyed around 945 Ha of land in an estimate by ANACAFE. Severe weather aside, road closures and local travel restrictions compounded additional delays in the coffee harvest from late December to early January, inflating internal coffee prices as exporters scrambled to secure supply.

“Everyone was desperate to get coffee, and competition was a bit fierce. Luckily we have our loyal clients and producers in programs and projects that give us the certainty that we will have coffee delivered to us with prices that won’t fluctuate as much because of internal market rallies,” says Carlos Umanzor, Specialty Coffee Trader at Volcafe Guatemala.

The rainy season in Guatemala these past two years has been more stable and plentiful, starting earlier in April and ending later in December. “The rain led to good cherry development and big grains in the farms,” says Carlos. “The quality from this past harvest is even better than last year, across the board.”

Due to the harvest delay, internal prices skyrocketed, and producers were able to reap the benefits. “With the market going up, producers were able to sell their coffee at much better prices than the past four years. In some cases, we saw people selling at 50% more than they did two years ago. It was a relief because we’ve had some really bad years,” says Eduardo Cabrera, Purchasing Manager at Volcafe Guatemala. 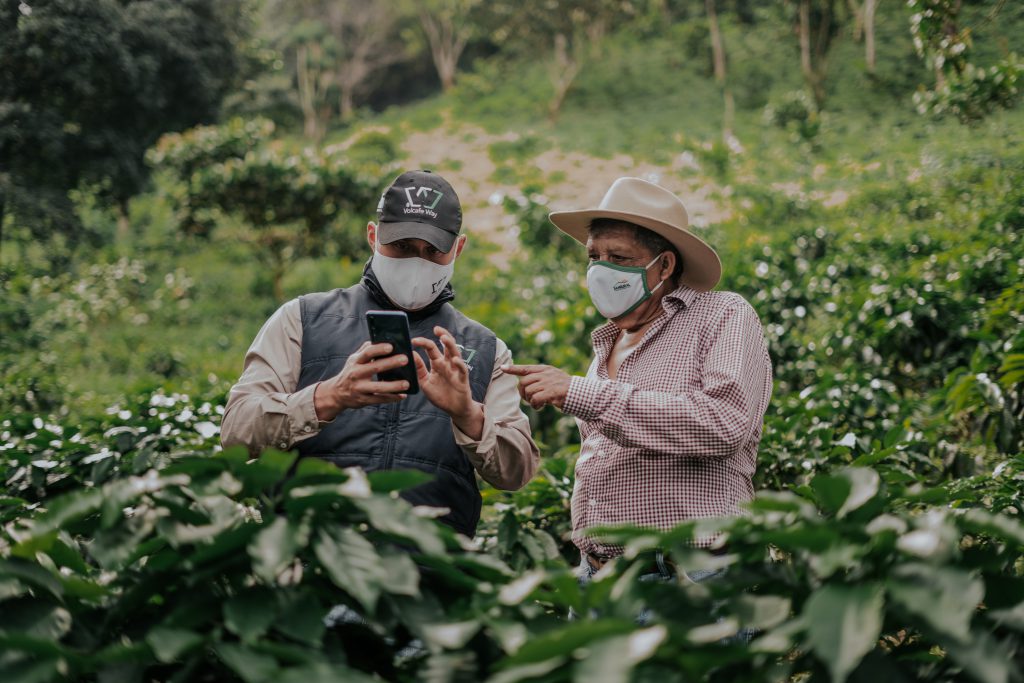 After a recent surge in virus cases, Guatemala is tightening restrictions to limit outdoor meetings and public events. However, the country’s vaccination program has barely made any headway, with only 5% of the population vaccinated with their first dose.

The local harvest labor force in Guatemala traditionally migrates back and forth from north to south. With the pandemic, producers in areas like Huehuetenango found themselves paying 30–40% more for pickers due to travel restrictions and a lack of available labor.

Genuine Origin received the latest containers of fresh crop Guatemala 20/21 recently, and a sizeable percentage was already pre-sold through forward buying. We’re always excited to receive green coffee from Guatemala, and cup quality continues to exceed expectations year after year. In our webinar from May last year, we particularly enjoyed seeing improvements in the livelihoods of our partner producers as our relationships grow. 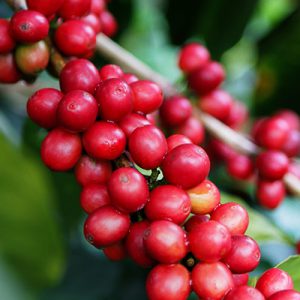 Genuine Origin has always been a service-centric green coffee supplier, and our sister company, Volcafe Guatemala holds the same values. “We recognize that the younger generation is entering the coffee business, whether they’re entrepreneurs, roasters, or importers who are taking over,” says Carlos. With an active social channel on Instagram, Volcafe Guatemala enjoys sharing everything they experience with their audience, especially with origin trips still out of reach.

“We [at Volcafe Guatemala] want to let them know we’re friendly and welcoming and can be reached anytime via Instagram, Facebook, Zoom, Whatsapp, etc. At the same time, we’re also working this inwards to our producers,” says Carlos. Volcafe Guatemala is constantly reaching out to farmers and helping them improve their implement best practices with Volcafe Way. As a Trader who’s often in the field, Carlos constantly engages producers in conversations around their coffee and gives them as much feedback as he can.

“When farmers give me samples of their coffee, they’re giving me part of what they harvested and planted, and I have to treat it with care,” he says. “I get a lot of questions about what varieties to plant, where we send our coffee, etc., and they know me as the specialty guy whenever I’m in the field. We want producers to know we’re open to trying new varieties and processing methods and want to know about all the weird stuff they’re trying so we can show it to our clients and stay ahead of the curve,” he adds.

Guatemala’s coffee landscape is changing. Our team reports that there is more activity than they have seen in decades. “We’re starting to see the sons and daughters of producers bringing new ideas and interests. It’s good for the country because you start to see that people who work with coffee achieve some sort of status. As exporters, we need to be very active and offer them something they can’t get on their own,” says Eduardo.

What Coffee Roasters Can Expect from Genuine Origin

If you’ve watched Genuine Origin live cupping sessions on Instagram, you’ll know how excited we are to taste the latest crops from some of our favorite Guatemala projects like La Morena, Candelaria and Cubulco, as well as micro-lots such as Pastores Mill Antigua Natural. 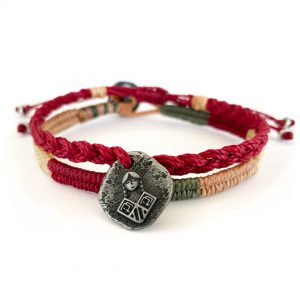 La Morena is a very versatile coffee with many application opportunities like single origin espresso, cold brew, blend components, and more. Black cherry notes add a level of complexity to the cup, along with flavors of milk chocolate, nougat, red fruit, and almonds.

In 2016, Genuine Origin imported 32 boxes of this one-of-a-kind La Morena coffee produced by women-owned farms, and now in 2021, we’ve increased supply to a full container. “We started with small batches and four producers, and now we have 23 women producers bringing in 35–50 bags each,” shares Carlos.

Maria Renee Morales, Assistant General Manager at Volcafe Guatemala, launched the official La Morena bracelet project in partnership with Wakami Guatemala to maximize the impact of this coffee on the livelihoods of women artisans in the country. Roasters who buy a box of La Morena coffee will also receive a bracelet to commemorate their involvement in advancing gender equality in coffee production. “La Morena has a special place in my heart,” says Jen Hurd, Genuine Origin’s West Coast Sales Manager. “Knowing that we’ve been able to grow that, get more producers involved, and have the bracelet project alongside of it is super awesome.”

The Baja Verapaz Cubulco 2021 is another coffee to benefit significantly from Volcafe Way efforts in the Cubulco area. “It’s not an area that’s well known for specialty coffee, but when three producers from Cubulco knocked on Volcafe Guatemala’s door years ago, we began a partnership that grew from 1–2 technical assistants in the field to more than 10 in the department,” says Carlos. “We went from micro-lots to full containers for GO, and we’re seeing more coffee being produced in the same amount of land and more jobs opening for the local communities.”

For a consistently solid Guatemalan coffee, the Los Huipiles SHB EP 2021 now comes in an organic lot with the same fruity flavors that are part of the Huehuetenango coffee legacy. The Los Huipiles line brings together the best in the region to create an approachable and well-balanced coffee, complete with traditional Mayan patterns and bright colors symbolic of the cultures that make up the area.