Tanzania is one of the largest countries in Africa by area and Arabica coffee production is around 650,000 bags (over 85 million pounds) per year – as much as its better-known neighbor, Kenya. However, the Tanzania has long been in the shadow of the countries it borders.

In the past, Tanzania coffee was collectively branded as “Kilimanjaro coffee” abroad, regardless of where the coffee was grown. Now, with well-governed co-ops leveraging their bargaining power for better market access and improvements in quality, producers and exporters are leading the charge for better traceability and quality in regional coffee production.

Tanzanian Arabica coffee grows in three regions: in the north on the slopes of Mount Kilimanjaro and in the southern regions of Mbeya and Mbinga. Although Tanzania has made a name for itself with Kilimanjaro coffee, only 25% of Arabica production originates from the mountain range. “Seventy-five percent is coming from the south, which has more potential for growth in volume and expansion,” says Juan Jose Suelves, General Manager at Taylor Winch Tanzania, Genuine Origin’s sister company and sourcing partner in the region. “Farmers in the south are younger and more energetic. It’s the opposite in the north,” says Suelves.

The United States Department of Agriculture (USDA) predicts Tanzania’s green coffee production will grow at one of the world’s fastest rates. But in Tanzania’s case, an increase in production doesn’t necessarily equal an increase in export volume. Although the USDA estimated a supply increase from 1.25 million bags in the 2019/2020 crop to 1.35 million bags for 2020/2021, they also forecasted a 16% drop in export volume, citing the auction system and COVID-19 as hurdles for the coffee to reach export destinations. Nevertheless, Tanzania remains optimistic about the global demand for their coffee and expects exports to rise continuously over the coming years. 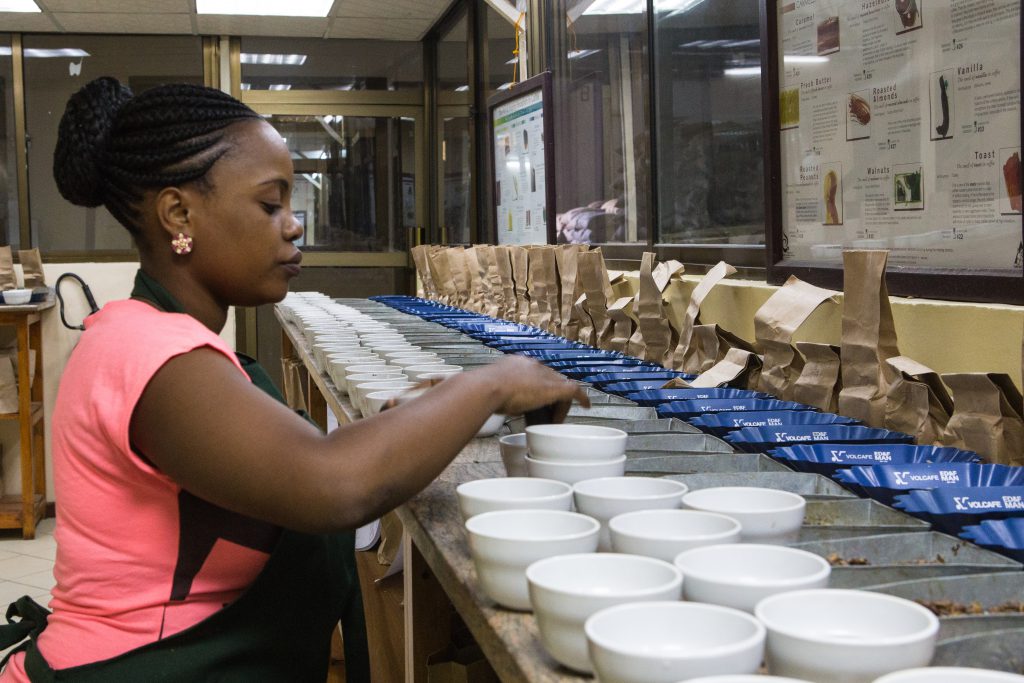 There are two ways to market coffee in Tanzania: through the central auction or direct export, where exporters like Taylor Winch Tanzania (TWT) buy coffee from producers through their co-ops. Since 1993, TWT has grown to be a leading exporter of Arabica coffee in Tanzania, and 30% of their coffee comes directly from their co-op partners. For an exporter to get government approval to initiate a contract with a co-op, they must guarantee they will purchase coffee at a price that’s higher than the coffee auction.

Agricultural Marketing Co-operative Societies (AMCOS) manage 95% of coffee production in Tanzania, with the remaining 5% produced in large, well-capitalized estates in the north. Smallholder farmers must be registered in an AMCOS to gain access to the market and support for production, processing, storage, transport, marketing, and government aid.

TWT’s mission is to be as close as possible to the farmer and to the client, a philosophy executed in their five-star service and support to both sides of the value chain. The services they provide span everything from due diligence to certification support and include training in agronomy, leadership, education, and more. TWT not only plays an essential role in adding value to coffee production; they are also a bridge between an AMCOS and its producer members on a district level and an AMCOS with regulatory and research institutions on a national level

Tanzania is a vast country with a wide range of terroir. Chocolate and caramel notes permeate coffee from Kilimanjaro in the north and citric acidity shines through coffees from southern regions like Mbeya. Mbinga has risen to the top in terms of Arabica production, and its mild coffee is known for its sweet berry notes and hints of chocolate. Peaberry coffee is one of Tanzania’s specialties, and demand for the elusive mutation is high, especially Peaberry coffees from Kilimanjaro.

All coffee sourced by TWT for Genuine Origin is through direct export and purchased from partner AMCOS groups in parchment. Washed coffee accounts for nearly all of the Arabica export. Farmers will usually process their cherries at their homes using hand pulpers. However, some AMCOS have Coffee Production Units (CPUs) that process cherries for their farmer members. In these cases farmers transport their coffee to the CPU for processing. After washing, the coffee is sent to a dry mill like TWT’s Rafiki Mill in Moshi, Kilimanjaro, where it is graded, packaged, and prepared for export.

Bourbon and Kent are the typical varietals grown in Tanzania. However, the twin threats of coffee berry disease and leaf rust constantly loom over coffee farms throughout Africa. “Every year, around 20% of the coffee trees die because of coffee berry disease, and the only solution is to cut the affected parts of the tree and let them grow again,” says Suelves. Thus new, compact hybrid varietals are being developed by the Tanzania Coffee Research Institute.

TWT has supplied over 100,000 new seedlings of the disease-resistant compact variety to their partnering AMCOS and the difference is staggering. “I went to an estate where they had the traditional varietal and the compact one, and the new variety is fighting the disease amazingly,” says Suelves.

In addition to agronomy support, TWT also implements the Volcafe Way in the center of their sustainability efforts with their AMCOS partners. “Volcafe Way requires deeper training than any other farm certification and it’s an exciting project,” says Suelves. “The focus is on capturing data and it’s an amazing feeling that drives us when we see the hard data of how a co-op we’ve been working with for a number of years can improve prices, quality, and volume,” he says.

Historical reforms to coffee production in Tanzania have significantly impacted the high-priority export crop — sometimes for the better, at times for the worst. From German to British colonization, to government regulation post-independence, and finally to privatized reform in the 1990s, coffee export in Tanzania saw drastic ups and downs in efficiency and valuation before settling into the co-op and auction system currently in place today.

The Tanzania Coffee Board manages the Moshi Coffee Exchange. It’s a complex system full of bureaucratic inefficiencies, as illustrated in the schematic diagram below, taken from the “Trading Manual for Coffee Auction Market.” 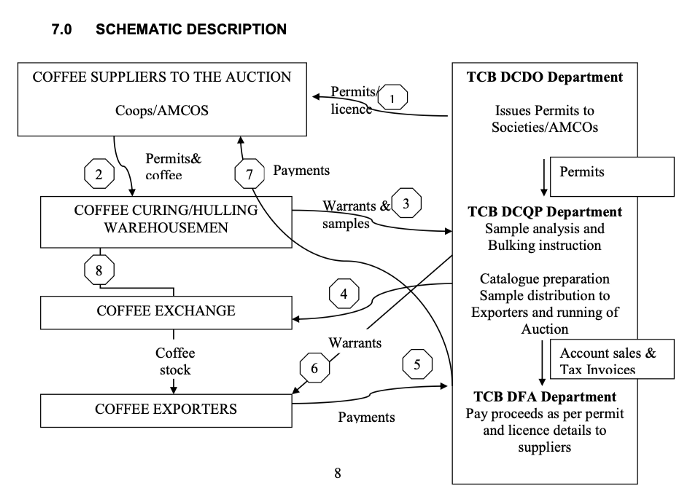 Coffee is milled two to three weeks before the auction. By the time it’s ready to be shipped, the auctioned Tanzania green coffee is already three months old. When coupled with less-than-ideal storage conditions at the Port of Dar es Salaam, the coffee that reaches buyers’ hands is often of deteriorated quality.

“The port conditions are like any origin country (hot and humid), but the main difference is that exporters and warehouses are also located at [Dar es Salaam]. When exporters bring coffee to port and try to sell it, they go through the whole inefficient bureaucratic system so the coffee stays in port for months. It’s devastating for quality,” says Suelves.

But the direct export route that TWT takes can circumvent some of the inefficiencies of coffee exporting in Tanzania. Because they purchase coffee directly from AMCOS, TWT can leave the bags upcountry until the last minute, when all the paperwork and shipping containers have been lined up and ready to go. “We can minimize the time the coffee is at the port from 3–4 months to two weeks, and it has a tremendous impact on consistency and quality of shipments on arrival,” says Suelves.

This is especially important in the time of COVID-19, where the shortage of shipping containers and vessels has led to delays in export. TWT’s ability to keep coffee in the cooler and drier regions up north ensures minimal impact to the quality of the green coffee their AMCOS partners have worked hard to produce.

Another benefit for direct export is that the producer retains ownership of their coffee until the point of sale. “Direct export gives farmers a chance to be the shipper on export documents. What we’ve noticed is that it gives them a chance to build a reputation at destination countries,” says Suelves. This allows roasters and buyers to request the same coffee lots year after year, encouraging consistency and stability all around.

TWT prides itself on the quality of support it can provide to clients and AMCOS partners alike. “It’s super important that the co-op is well-managed and has the right energy for such a partnership. We select the AMCOS producing the best quality because we can provide such good service and we make sure the AMCOS management board is energetic,” says Suelves.

Once TWT decides to partner with an AMCOS, the first thing they provide is finance — in particular, cash before the harvest so producers can apply fertilizer and pesticide to their trees. The cash also comes in handy for repairs to any washing stations. “It’s more important to provide training at the processing level first because there’s more impact on the quality. Then we start training at the farm level in the long term,” says Suelves. 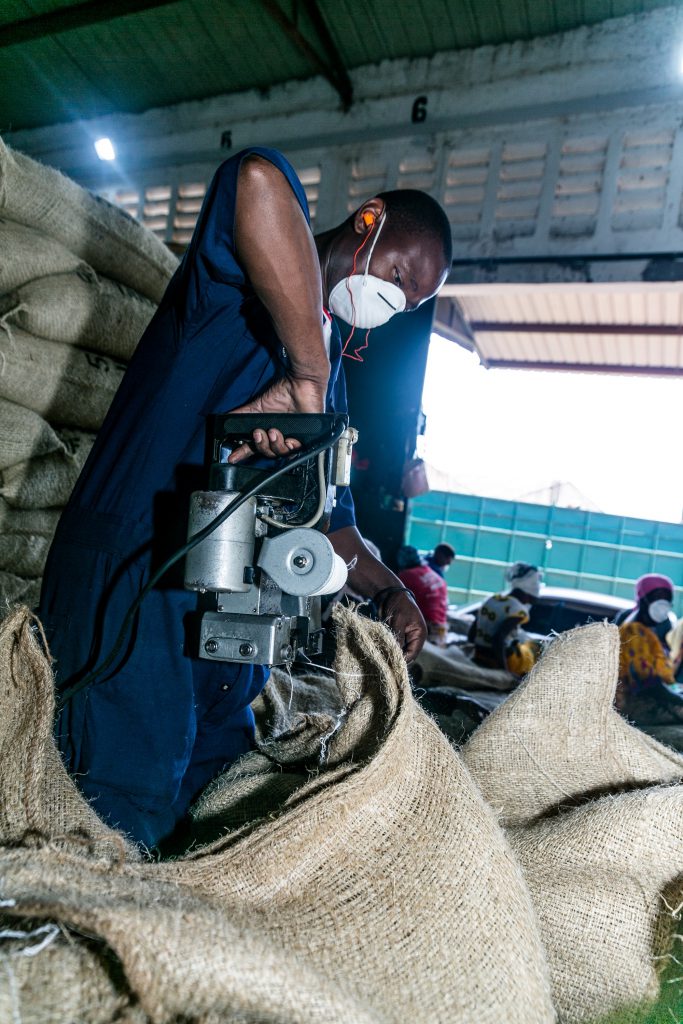 As part of the Volcafe family, TWT is backed by the brand’s entire portfolio of roasters and buyers, connecting them with their partner producers in Tanzania. When an AMCOS engages with TWT, their coffee is guaranteed to be purchased through the direct export window, earning them a higher price than the auction.

One such partnership began in 2014 with the Iyenga AMCOS in the Mbozi region, with over 170 member farmers. In three years, TWT helped Iyenga gain UTZ certification, pushing up prices and attracting large coffee volumes from the farmers. To engage the younger generation, TWT financed and trained a youth group to provide coffee services like pruning and fumigation.

“The traditional coffee farming system takes a long time to get your money back, which makes a lot of young people reluctant to farm coffee. [In Tanzania] it’s more of a family passion that’s owned and grown,” says Harriet Kindole, Marketing and Project Manager at Taylor Winch. “We trained and supplied equipment to a team of young entrepreneurs so they can offer coffee services like applying pesticides or stumping as another way to earn money.”

The success in Iyenga is tangible, especially with a new CPU financed by the UK-based agricultural investor AgDevCo in 2019. “Farmers who brought their coffee to the CPU received more than 1,000 TSH more per KG last year…You can see the impact that has on their lives. They have galvanized roofing sheets on their houses now. Since Taylor Winch started training us on fertilizers, the land isn’t degrading like it used to. We’re farming like businessmen now,” says Runwell Santinywa, an AMCOS farmer. 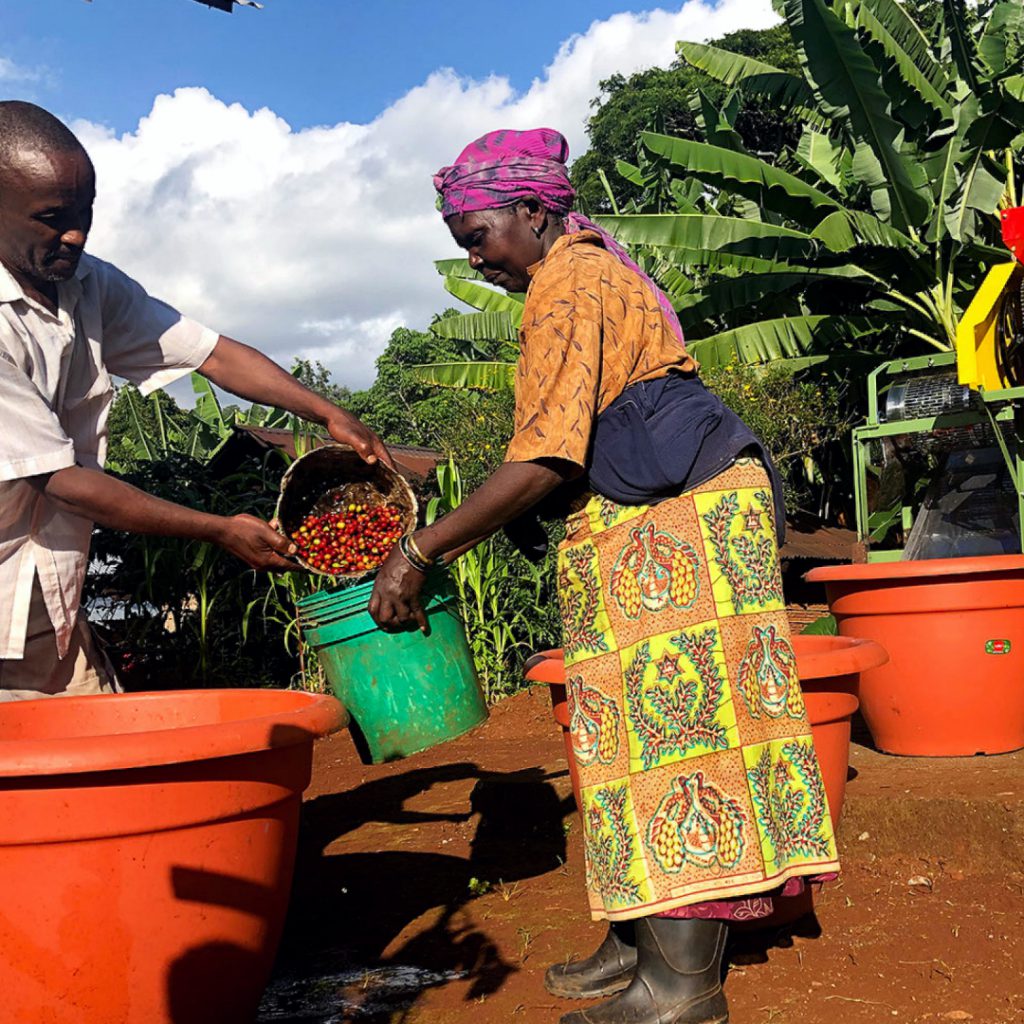 As TWT strengthens its relationships with AMCOS and private estates, they are building capacity to conduct more experiments in coffee processing. “When we have confidence in a partner farm, we can do small trials with naturals and honeys,” says Suelves.

Since the Iyenga AMCOS became a TWT partner, they’ve taken 1st place in the 2018/19 Tanzania Coffee Board Taste of Harvest Competition. The Iyenga-Mwalyego-Kimuli AB 2021 lot is a culmination of three award-winning AMCOS like Iyenga from the Mbeya and Mbinga regions, and the resulting complex coffee is an outstanding cup with a thick, syrupy body, brown sugar sweetness, and tea-like acidity.

Genuine Origin already has plans in place with TWT to do more trials with Tanzania coffee and in the meantime, we’re looking forward to a beautiful upcoming crop that bloomed with a great rainy season. Coffee roasters can expect continuing improvements in quality from carefully curated co-ops in Genuine Origin’s Tanzania portfolio. To learn more about Tanzania and Taylor Winch, watch Genuine Origin’s Tanzania Green Coffee Origin Report Webinar on YouTube.

Find out more about Genuine Origin’s Tanzanian coffee collection on our website — https://www.genuineorigin.com/tanzania