Brazil does just about everything just a bit differently, particularly compared to its coffee-producing neighbors in South and Central America. Coffee processing is unique and uses unique terms; farms are much, much larger, on average; and the stage at which coffee is sold by farmers (as green) is also unusual.

With new coffees from Brazil pouring in — a “fully washed,” naturals and a “pulped-natural,” (or semi-washed) — we turned to Marcelo Pedroza, head of our Specialty Coffee Trading Team in Brazil. Here are seven insights he shared on a recent call.

The vast majority of Arabica coffees produced in Brazil are natural process, where the weather permits.*

Brazil’s coffee regions generally have an abundance of sunlight, well-defined seasons and a rainy season that begins at the end of the harvest in September and extends until April. Because the rain lasts through the flowering and filling periods, a uniform flowering can occur, leading to an even maturation cycle and making it possible to harvest just once. Further, the dry, winter season coincides perfectly with coffee’s drying period, which explains Brazil’s fondness for enormous drying patios.

“When you do washed and semi-washed,” says Pedroza, “unless you are an enterprise that can handle everything on its own, you have to invest in a lot of equipment and infrastructure; work under a strict harvesting plan, prioritizing the harvest of fully ripe cherries, which means multiple harvests in a place with incredibly high labor costs; and put a lot of time and effort into post harvest, to ensure the coffee doesn’t spoil. So, it’s much more expensive to produce semi-washed in Brazil.” 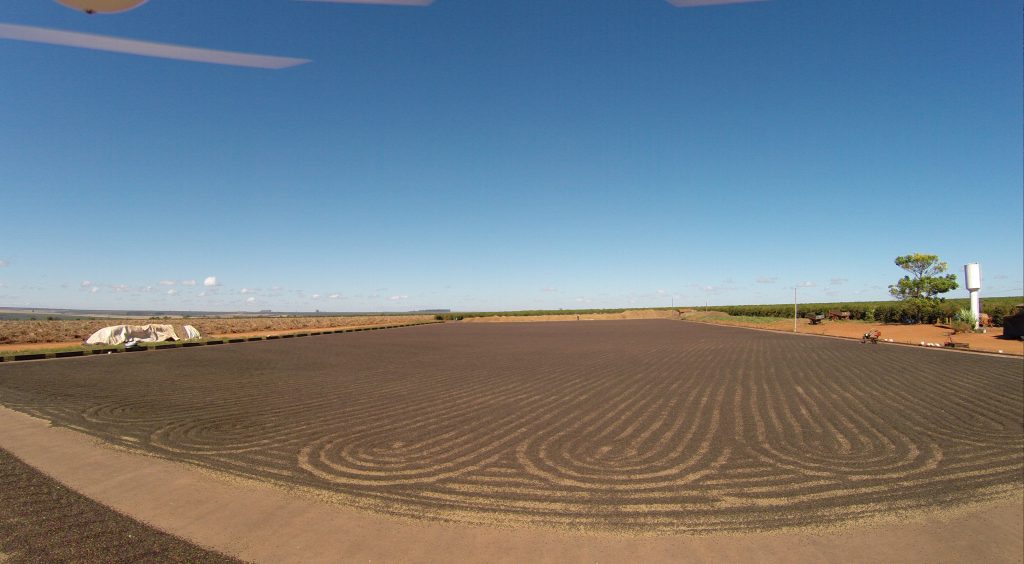 In the Cerrado (say-HA-doe) region, the weather is very amenable to natural coffee processing.

“We have sun all the time in Cerrado and very warm temperatures. It’s ideal for the natural process, and I believe the natural process keeps all the complexity and the real features of the coffee and the taste of a genuine Brazil,” says Pedroza. “The naturals carry more sweetness, more nuances and intensity. It’s my favorite cup.”

Exceptions are places like Planalto da Bahia (in Brazil, the H sound is silent and borrows the sound of the next letter: ba-ee-ah). Home to GO’s Jazblu Peaberry, it’s known as “the Switzerland of Brazil,” says Pedroza.

Planalto has a singular weather pattern that’s cooler and wetter than other parts of Bahia (which are generally dry and arid). It has mists and fog and a wet season — which is why coffees here are dried in green houses instead of on patios. 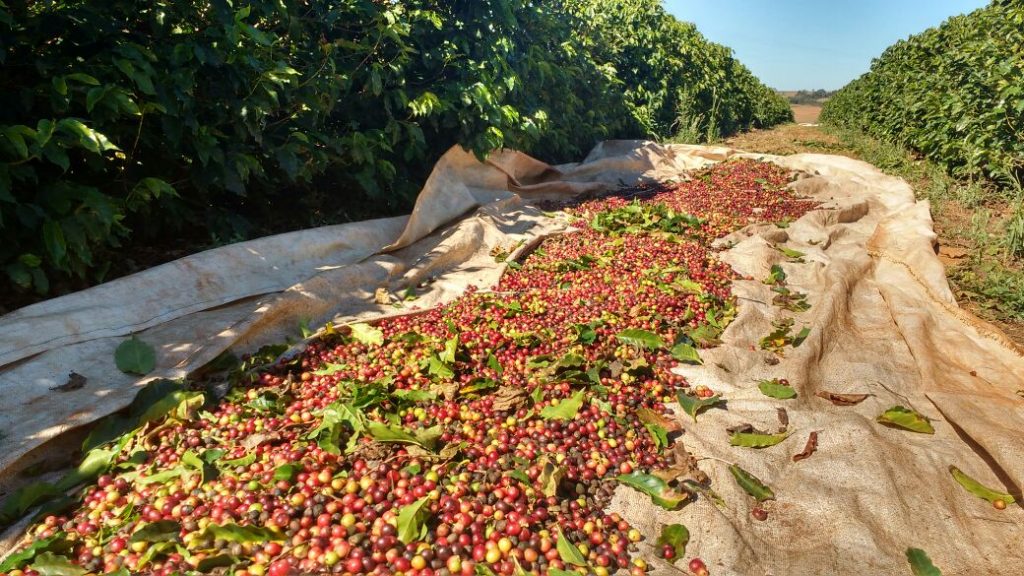 Coffee harvesting in Cerrado. During processing, density sorters are used to separate under-ripe cherry from ripe and dried cherries.

“In Brazil, Natural means that you follow the cherries’ natural development and finish the process with as few interventions as possible. Based on your harvesting plan, you let the cherries dry on the tree and start the harvesting, whether with machines or manually, when you reach an optimum maturation percentage of unripe, ripe and dry, considering your favorite processing method,” explains Pedroza.

When harvesting machines are used, cherries of all different maturation degrees are sent straight to the patios/washers from the tractors. When the cherry is manually picked, workers cover the ground with canvas, strip all the cherries from the branches and let everything fall. At the end of day, the branches and leaves are removed, and the cherry is gathered up in the canvas and taken to the patios or washers.

This style — with overripe, ripe and dried together — presents a quality challenge, since the goal is to preserve the quality of cherries, as well as to reach a homogenized moisture level between 11.5 and 12 percent. While it’s possible to create a delicious coffee this way, it’s complex, time consuming, weather dependent and introduces a serious margin for error.

“It must be done very well,” says Pedroza, “with a combination of quality-oriented farmers, careful post-harvest handling and the right weather.”

In Brazil, the term Pulped Natural is used to clarify that a coffee is washed but hasn’t spent time in a fermentation tank. Locally, it’s referred to as cereja descascada (“de-husked cherry) or cereja despolpada (“de-pulped cherry”).

With pulped natural coffee processing, the cherry is put into a washer with a density sorter that separates the ripe cherry from the under-ripes and dried cherries. GO’s Matas de Minas offers this coffee processing method to roasters.

“The ripe cherry is then sent to the de-pulper. They are de-pulped, de-mucilated and then the parchment leaves the machine and goes straight to the patio,” says Pedroza. “After it spends time under the sun, it’s sent to mechanical driers, to complete the process.”

By contrast, when a coffee is fully washed, it’s de-pulped and then — instead of having its mucilage removed — it goes into a fermentation tank for 8 to 12 hours. Then it’s washed again, to clean off the mucilage, and sent to be dried — in a greenhouse, in the case of Jazblu Peaberry.”

During the fermentation stage, “The sugars are interacting with the parchment, which enhances its sweetness and intensity,” says Pedroza. “In Bahia, the locals call it café degomagem, in Portuguese, or what might be called ‘de-gumming’ in English. It’s the only place in Brazil that they use such a name to explain their fully washed process.”

Is fermentation the key element to a sweet, washed coffee?

“Interaction with the mucilage can make the cup profile more complex and sweeter, many people believe. But it’s hard to limit the explanation to this single event, considering all the interactions the fruit goes through on its journey,” says Pedroza.

“It may also be the result of the perfect combination of the single terroir and its interaction with the coffee trees and the variety planted, of the right post-harvest process and of selective harvesting,” he continues.

“We selected the Planalto da Bahia region, a micro region in Bahia, specifically for Genuine Origin, because there is selective picking here and a well-adapted post-harvest process that favors the production of high-end coffees. Unlike in other regions, and even other parts of Bahia, where everything is harvested at once, in this micro region, only ripe cherry is harvested and goes to the de-pulping station. And again, this is the result of farmers adpting to the unpredictable weather patterns in the area. While much of Bahia is hot and arid, Planalto da Bahia is nice and cool. The Switzerland.”

Shop the Brazil Collection and find all of the coffee processing techniques Brazil has to offer.