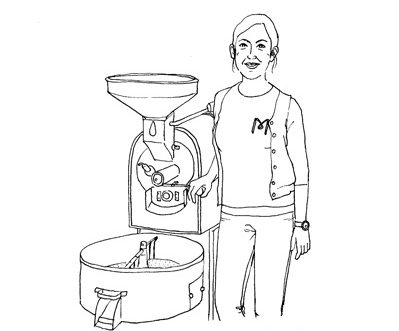 “This year began with women across the country marching against misogyny and inequality and is ending with women personally and publicly speaking out against sexualization and assault,” Modest explains on its web site. “On paper, women may have earned equal rights, but culturally we have a long way to go, both in our own country and countries around the world. This is evident in many ways and in many fields, and the coffee industry is not exempt.”

Modest, founded by wife-and-husband duo Jenni and Marcus Contaldo, have a holiday tradition of creating a special Black Friday release — a Special Collector coffee. When they heard about Genuine Origin’s La Morena, a green coffee that was grown, harvested, milled, cupped, exported and imported all by women, they knew they’d found their holiday coffee.

For every pound of La Morena that GO sells, we donate 35¢ to the International Women’s Coffee Alliance (IWCA).

“We decided that Jenni would roast it, and for every bag sold, we’ll donate $5 out of our pocket to Mutual Ground, a women’s shelter here in Aurora,” Marcus continued. “Then a local market, Prisco’s Family Market, agreed to be our exclusive Black Friday outlet for the coffee and to also donate a dollar for every bag. Then we just started reaching out to everyone—our insurance agent, our landlord, our friends! Everyone we could think of we reached out to, and we’re up to $10 a bag that will go to Mutual Ground.”

“When we heard about it, we loved the story but also the impact that we could have with it,” adds Jenni. “We think it’s cool to extend the chain by donating to women. Also, the holiday season doesn’t always have to be about buying—it can be about giving. And with all that’s been going on, as far as a modern women’s rights moment, we thought it would be a good, empowering way to end the year.”

Other roasters have also embraced this coffee, joining the line of women involved.

“We heard about it a few months ago and discussed it with our team of ladies here, and everyone was very excited,” says Margaret Ptacek, one of five owners at Ten Drops Coffee, in Plainfield, Ill., and one of three women who will roast it.

“We’re in the process of building out our second location, hopefully finishing up before Christmas,” says Margaret. “So, we’re just getting to it. But we have a fantastic team of women who will be involved in the ‘second half’ of the coffee chain: roasting, packaging design, marketing, etc.”

It’s a company that’s all about group efforts.

“The row of buildings we’re in has a micro brewery and a craft distillery, and we’ve been fortunate to partner with both,” says Margaret. “We’ve done a coffee beer, and the distillery sells a coffee rum that has our beans in it. It was great to be able to say, ‘Ok, you’re doing a coffee beer, what flavors are you looking for, how dark do you want this roasted?’ It was fun to do a custom roast for them and to create those collaborations.”

Even the Ten Drops name suggests community. It comes from Scandanavia’s culture of hospitality, in which households would offer a visiting clergyman or salesperson a cup of coffee. Someone visiting numerous houses in a day, however, could face a jittery night.

“So when people offer coffee, the response is, ‘Just 10 drops,’ Margaret explains. ‘You’re not saying no, but that less than a full cup is ok.”

From One End of the Earth to the Other

In 2010, Melissa Raftery and Megan Wood opened 44 North Coffee on Deer Isle, an island off the coast of Maine that Megan, a local, has described as “the end of the Earth.” Originally, they imagined opening just a roastery, supplying the community with freshly roasted coffee. But quickly, they realized the community wanted — community. They wanted a place to gather and sit and have conversation.

“They wanted connection,” says Melissa, “and we knew we could offer that.”

The strength of their community was also literally responsible for their success. In their initial location, their roaster was on the second floor; when a green coffee delivery arrived, neighbors would turn out to help lug the bags up the stairs. This spring, 44 North moved to a new, first-floor location, which, “our bodies, and our neighbors’ bodies, are really grateful for,” Megan laughs.

“The Genuine Origin white boxes,” she adds, “are so civilized.”

When asked why they do what they do, each ultimately speaks to the link they represent in the life of coffee.

“Once you’ve been in this business for a little while, it actually becomes way more complex and interesting than it was even when you began,” says Melissa. “I’ve drank coffee since I was 13 years old, and it was always a part of my family, and I knew I wanted to work in a coffee shop early on in life …

“I knew going into it that it was something I could feel passionate about,” she continues. “But it has also turned into this really creative outlet that keeps me excited about it — the ability to wear so many hats every day and to work with people who are depending on us for their salaries — that we can offer jobs in our community. And I see myself changing [and growing] and the passion is still there. I still feel excited to show up and know what we’re providing every day.”

Megan, too, has found more than she anticipated.

“Coffee as an industry brings people together so simply, in an accessible, low-ego, between-equals kind of way. And to be able to create a space in our local community, on this island, that supports that is really important. I don’t know if I would have known that when we first started. I knew coffee had a lot of attractive connections to global agriculture and travel and trade and things that I thought I wanted to do with my life. But what it comes down to is the ability to create a space in our community that fosters support and equality and to have a really strong connection to a coffee that we pick and that connects us to the larger world of coffee.”

La Morena was their first order from GO.

“The Genuine Origin model seems like a really nice way to have transparency and connection to microlots and communities and producers,” Megan continues. “We couldn’t have pieced together this whole chain of women making coffee, but the fact of all the work that you all did, and that we can step in at the end and be a part of this bigger story, excites me.”•