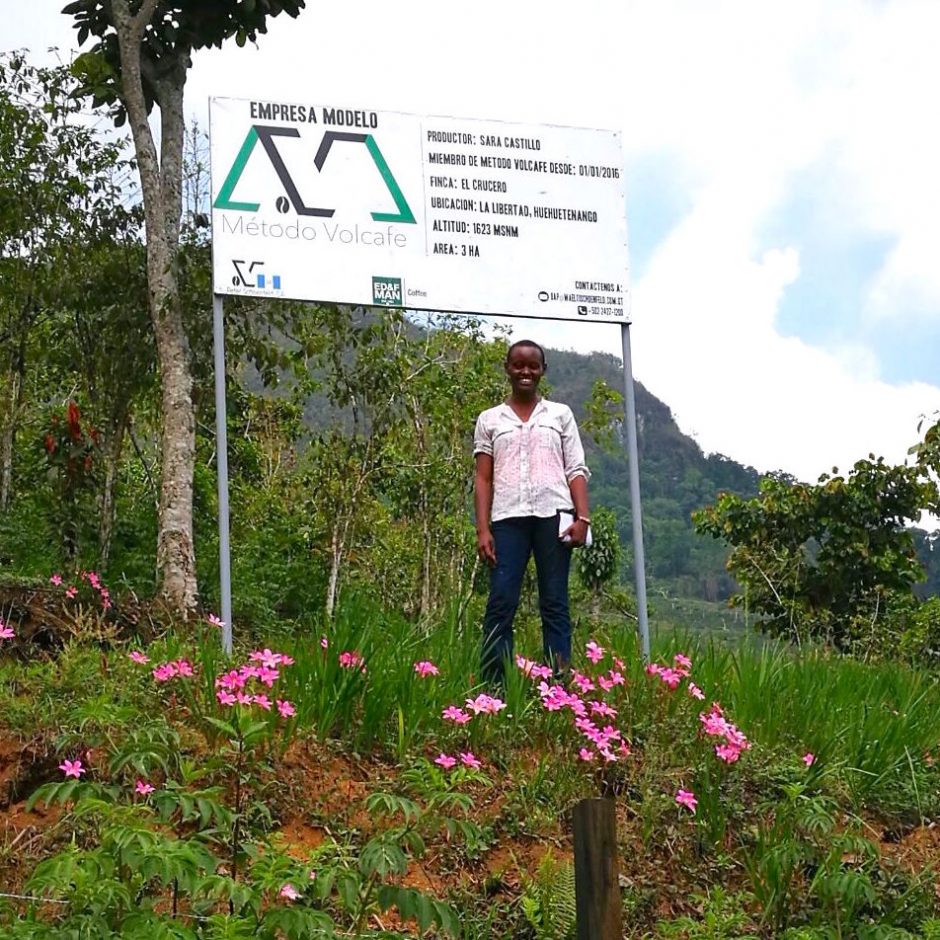 “Profitability is good to chase, but hard to achieve,” Elizabeth Mbau said back in May, on a call from Costa Rica.

In April, Mbau joined our team as the Africa coordinator for Volcafe Way, bringing with her experience from Technoserve, where she monitored a coffee initiative in Kenya; the Rainforest Alliance, where she oversaw the impact of a certification program for coffee and tea farmers in East Africa; and from a consultancy in Central Kenya, where she managed a community project tied to climate change.

A first order of business was to see implementations of Volcafe Way in other coffee countries, and when we caught up with her, she’d just finished tours of Honduras, Guatemala and Costa Rica.

“There were many different things to learn from every country,” she said. “I did have some things to contribute, but it was mostly a learning process. I’m in Costa Rica now to wrap up, discuss what I saw, and prepare for my way back.”

Her job will entail the full roll out of Volcafe Way in Tanzania, Uganda and Kenya — each of which has different social structures that will impact her work.

“Tanzania has a very collaborative society, very much guided by the past socialist system,” Mbau explained. “So, my job there is to elaborate on this structure, and what it means to have a farm or a group adhere to Volcafe Way.”

She continued, “Tanzania is very interesting to me because it wasn’t disrupted by a lot of modern influence, economically. In parts of Mbinga, when harvesting is being done in coffee, and other crops, they will do it communally. A group of farmers will move from one field to the other, until all the harvesting is done. So if it’s a particularly heavy season, they’ll organize themselves so that they’ve done all the rounds and are back to the first one in a week, so that the whole crop is picked on time. Weeding is done the same way. And they will do it to music —there’s a soloist, carrying a drum, and they will harvest to the beat.”

When asked about cultural challenges, she pointed to a cultural trait likely to help her in her work.

“From what I can see is, they are very competitive. Especially in Mbinga. When I was visiting, I was struggling to find a house that wasn’t a brick house. I asked this question to the technician and he told me, ‘When one person gets ahead, everyone tries to do it.’ I’m sure the first person who gets a satellite dish is going to spark something big!” she laughed.

“They adopt very easily, they’re just waiting for a first adopter,” she continued. “So, the concept of model farms is interesting, and I think it’s going to find a place in Tanzania, because of that culture. If my assumptions are right, I think the right work done on the farm, having the right advertisement, is going to really catch fire. I’m really looking forward to how this is going to take off in Tanzania.”

“Uganda is very dynamic,” she explained. They have different communities settled on Mt Elgon — there are different coffee farming cultures across that mountain. One part of the mountain adapts to the training, because, I believe, they have more trading opportunities, given their proximity to the border with Kenya. Coffee is one of many things they do, and they seek proof of its profitability over other enterprises.”

She went on, “Plots on the other side of the mountain are smaller, but they look more productive. I think it’s a matter of having the right examples. I think the plots on the opposite side are just as capable of improving production. For me, I’m looking for challenges. So, I look forward to working with that section of Mt. Elgon. There are a lot of possibilities.”

What Volcafe Way Is and Isn’t

When asked how her work will compare to her previous efforts, she noted that when farmers hear the word certification, they expect “immediate results, in the form of money.”

“But in terms of really changing the business of coffee, which I believe Volcafe Way is about, this is about principles. It’s more important than only concentrating on certain aspects that the market wants. It’s about communicating a need to be sustainable for the long term. And if farmers feel they can rely on coffee as a means of making a living, they will protect that income stream.”

Mbau is also keen to help producers in Uganda and Tanzania to set themselves apart.

“Tanzania and Uganda have very unique profiles now. In the past, when coffee from Uganda was being sold or discussed, it was mostly in comparison to Kenya. But it will be helpful, and respectful, to further develop different profiles and ways to describe coffees from these areas. Even the south of Tanzania is quite different from Kilimanjaro, which is doing well now. So, the team in Tanzania is working with groups and continuing to build the capacity, continuing to increase the membership, so they’re really formidable cooperatives that can deal with the markets with very well-defined coffee profiles.”

From there, she added, “We need to get the word out that these coffees are different, and there’s a profile for everyone.” •

We hope you’ll taste the differences for yourself! Click to order free samples. Or: Shop Uganda. Shop Tanzania. Shop Kenya.