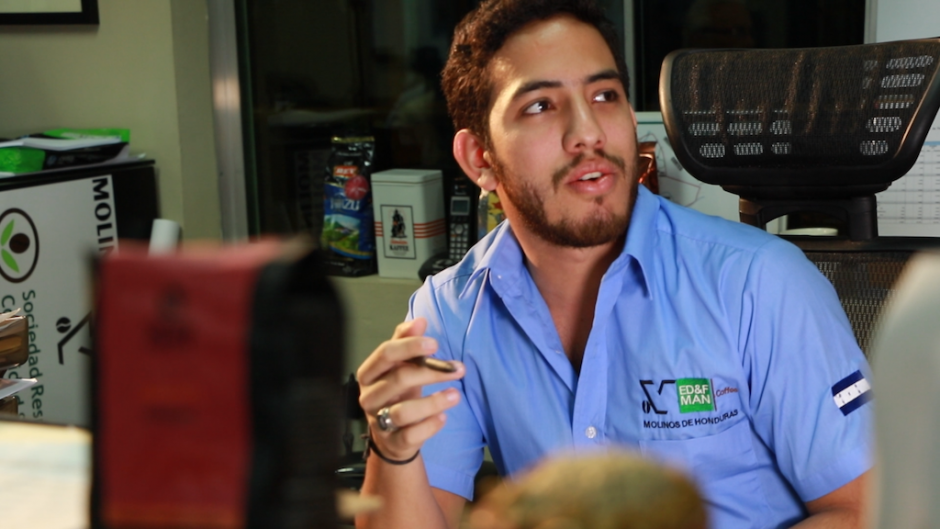 “I find a bit of excitement in telling other people about my country, and letting them know what it is we do here and what Honduras has achieved in the last three or four years,” says Carlos Umanzor, with Genuine Origin sister company Molinos de Honduras (MDH), when asked about his favorite part of his job.

“Because, these aren’t like other offerings. Last year and this year — these coffees are the offspring of my colleagues’ efforts.”

When asked his official title, Umanzor grins and scrolls to consult the bottom of an email. “Sustainability and Specialty Trader!” he announces, adding, “It’s kind of a new position.”

After earning a degree in food science from Zamorano, an agricultural university in Honduras, Umanzor began working at MDH in the purchasing department, as the assistant to the head buyer. In 2016, he went to Italy, to earn a Master’s degree in Coffee Economics and Science through Illycaffè (“You learn about the whole coffee supply chain, and everything from the genetics of coffee to latte art”), and then returned to MDH. His new role includes everything from visiting producers across Honduras, to helping oversee the production and packaging of green coffees, and helping buyers to find the right lots for them.

Is part of his job also messaging the changes that have taken place in Honduras, and the increases in quality?

“The proof of that already exists in how many people have come here and then followed up,” he answers. “They don’t treat coming to Honduras as a cute experience in which they get to see mountains and taste coffees. They have the feeling of wanting to take back home what they experience here — they want the coffees. So I think that message is already very well received.”

In addition to 13 microlots — coffees mostly from individual producers or micro regions — Genuine Origin is proud to offer three macrolots, or community lots. These coffees combine the offerings of a number of producers. Guama Danta Reserva, for example, represents the work of 87 producers from the Central Region. (Each of their names is listed on the coffee’s factsheet.)

While it can feel satisfying to put a single face on a coffee — to trace it back to one family farm — that’s almost never the way coffee actually works. We value these community lots for two reasons. One, because they capture the essence of a region, rather than the terroir of a farm. And two, because they’re essential to sustaining coffee communities.

While it can feel satisfying to put a single face on a coffee … that’s almost never the way coffee actually works.

MDH and Genuine Origin are committed to supporting a sustainable specialty-coffee supply chain. Buying a farmer’s best bags is exciting — but no one feeds his family for a year by selling just his best bags. That’s why our Volcafe Way program works with producers to raise quality, yield and profitability across the farm; and thanks to the size and reach of our parent and sister companies (Volcafe and Volcafe Specialty), MDH can purchase all of a producer’s or even a community’s coffees — and set aside exciting, small selections for Genuine Origin.

“It was interesting to get that lot, we were very happy. We thought it was going to be harder, since it’s similar to Comayagua, in that it’s composed of a lot of small producers — a lot of individual producers who we are completely new to,” he explained. “In Honduras, the Paraiso region has been very special, in that they have good coffee but they have always been in the hands of intermediaries, who have just mixed the coffees and have not let it shine. They just treated it as volume, in the traditional way.”

He goes on to explain that there was a lot of misinformation about how to dry coffees. Plus, many producers don’t have their own drying infrastructures, so they would sell to the intermediaries who would combine it all and dry it in their own dryers — “big mechanical dyers that hold 300 bags at once.”

“Mata de Platano is like a special, little bright bit of sunshine … it’s a completely different type of coffee.”

MDH and Technoserve, a non-profit that operates in 29 countries, determined the altitudes where the highest qualities were possible, and invested in drying stations in those locations. This eliminated the risk of receiving mixed coffees. Producers would bring, five, six, ten bags, and MDH would dry each one separately, with quality control experts isolating the especially excellent ones.

“Immediately, we received cleaner coffees. We were also at the perfect spot to receive the Parainema variety, which has these amazing, delicate, flowery flavors. Which is just the kind of the thing we were looking for. We wanted something that wasn’t as delicate and acidic as the Pacavita, which is the Western region, and not as strong, or with as much personality as Guama Danta, which is more flavors, more fruits and a more balanced cup,” Umanzor explains.

“Mata de Platano is like a special, little bright bit of sunshine. It’s really a complete shift and not at all related to the other two. It’s a completely independent, different type of coffee.”

As for the drying stations, Umanzor says that technical experts are working with the producers, teaching them to expertly use the stations and be able to deliver the already-dried coffees themselves — which will increase their revenue per pound.

With Pacavita, in the Western Region, “You know what you’re going to get,” says Umanzor, “and because it’s so good, you’re always expecting more.”

He describes Pacavita’s flavors as “the best possible match” between bright red and orange fruits.

“Think juicy peaches and red apples with a bright and outstanding acidity that kicks in just after the sweet flavors. Plus, yellow limes and grapefruit acidities hitting the spot.”

Added to that are a “medium body mouthfeel with a consistent flavor and prominent aftertaste.”

In terms of quality, “It’s a no brainer. It’s bright and easy to enjoy several times, without becoming dull.”

The coffee for this lot largely comes from co-ops that MDF works closely with, like Cafico.

“They have their own established area already, and they do most of the work for us,” says Umanzor. “They do the premium selection, they identify producers, and we’ve built a great relationship with them, with so much trust. … Last year, they already kind of knew what we liked, but this year they really enhanced their precision, and it’s been fantastic.”

Umanzor pauses, searching for the right way to describe the Guama Danta region.

“It’s the hub, the mother source of everything — the mecca of coffee in Honduras,” he offers.

The Comayagua region, which produces the highest volumes in Honduras, is located in Guama Data, and MDH has aggressively invested in building greater numbers of solar dryers, in order keep lots separated and distinct.

“There’s a valley, and we’re located in the middle of valley,” says Umanzor. “All the coffee that’s in the surrounding mountains kind of drops down to that middle point, and we’ve converted all our extra land in Comayagua to solar dryers.”

For fun, the Molinos de Honduras team recently held a “Pacavita Battle Royale,” comparing last year’s harvest with the current batch. Joshua Tracey, general assistant manager at MDH, told us, “Obviously, the new Pacavita was much stronger in cup profile and flavors. But it was really interesting to see that even though the ‘year-old’ Pacavita has faded in quality and flavor, it still has a quite nice acidity and sweetness.”

He continues, “Because they produce such incredible volumes, there’s basically continuous production. So, if you have a solar dryer that holds five or 10 bags, and then you do another picking very soon after, there’s not enough sunlight or time in between. We’ve adapted to accept the very fast deliveries that each producer makes. He can be pre-drying one of the pickings while we dry what he picked two weeks earlier or a week earlier, and we’re able to control it all and keep it separated.”

On top of that logistical fun, coffees from El Paraiso and Pacavita also go into the same storage room in Comayagua, because it has a better climate for storing coffee.

“Guama Danta has a more intense flavor and a more well-rounded body. … You get a lot of red cherry flavor.”

As for flavor, despite the size of the area, and the number of producers, Umanzor says it’s still definitely distinctive.

“Guama Danta has a more intense flavor and a more well-rounded body. It’s not as delicate as Paraiso. You get a lot of red cherry flavor, combined with a strong body and a medium acidity. It’s not intense and bright, but it compensates with a really good, stable cup.”

Is it an ideal coffee for an espresso blend? Umanzor agrees, but has his own approach.

“I would say Guama Danta is the jumpstart coffee in the morning, like the kickstart coffee you need in the morning. Then,” he continues, “I’d have Pacavita in the afternoon, as the after lunch coffee. Mata de Platano is that special coffee you want sip when you can really sit and enjoy how very nice and delicate it is.” •

—
Samples of Mata de Platano are available now, and boxes will follow in the coming days. Fresh harvest Pacavita and Guama Danta are expected in the store by June 1.