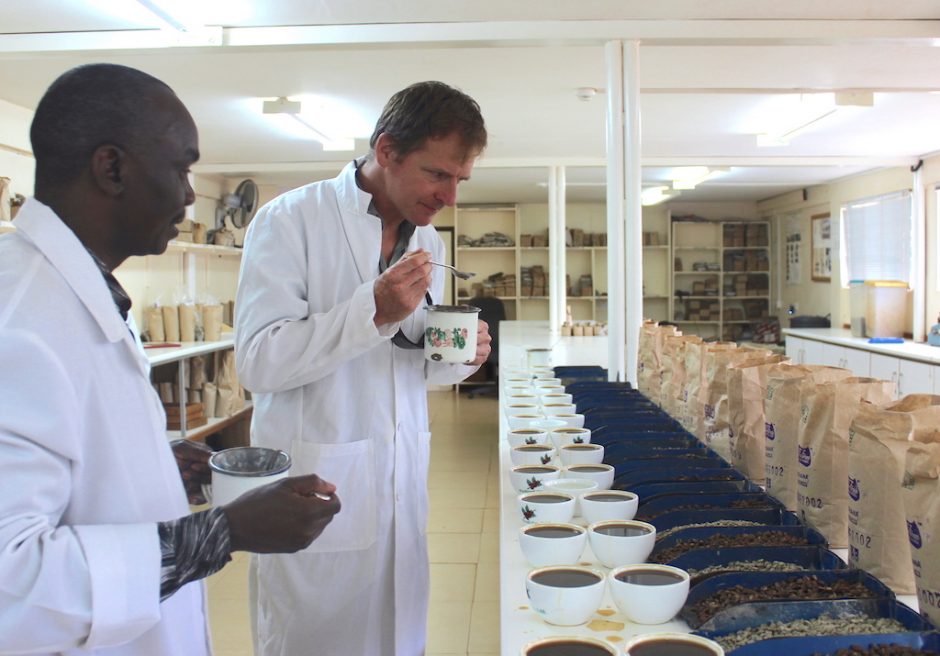 Dirk Sickmueller, general manager at Taylor Winch Coffee Ltd., GO’s sister company in Nairobi, selected our incoming Kenyan coffees. We asked him what to expect, how the harvest was and what his favorites are.

Dirk Sickmueller: At Taylor Winch, I work with a team, and our main task is to trade green coffee beans from Kenya. We cup coffees, and I’m at auction every week, where 85 to 90 percent of Kenyan coffee is passing through. My job is to oversee the team and make sure our exports go out: the right quality, at the right time, to the right client, at the right price.

GO: You found 11 beautiful coffees for us that are on their way and we’re very excited about. What was the growing season like?

DS: This last season was short, sweet — and expensive. We knew by about September or October that the season was going to be difficult, and the crop wound up being lower by about 25 to 30%, compared to the previous year.

A mill for small holder farmers in Karatina, in Nyeri County, Kenya.

DS: In January and February 2016, it should have been the hot, dry time of year, but we had unseasonably heavy rains. And the rains caused the trees to stress less than they otherwise would have at that time of year. So when the rains finally did come, at the end of March, the trees were quite happy and only flowered about three-quarters as much as they should or could have.

We then subsequently had a very dry period from July all the way through to the harvest time. So those two things —the poor flowering, because of the moisture in January and February, and the dry spell from June until the end of the year — resulted in a smaller crop.

By the time coffee started appearing at auction in January 2017, prices were sky rocketing from the beginning. And we were a part of that as well. We were keen to get our hands on the best coffees, and the best coffees came through in January, February. And I’m glad to say we bought a decent share of those.

GO: How did the weather impact the quality, or flavors?

DS: Quality was actually sweeter. Because of the intense, dry weather during the second half of the coffee being on the tree, I believe the fruit was a little more sweet, resulting in slightly better, sweeter cups.

I understand that in the specialty world, sweetness is desirable. So yes, we have the expected acidity, and we have berries and ripe fruits and ripe plums and apricots. But also we’ve been able to find a high level of sweetness this season, compared to last season.

GO: Windrush is among the Genuine Origin microlots. You mentioned at SCA that this is a rather unusual coffee?

DS: Windrush is an estate just about 20 km out of Nairobi, at a pretty high altitude — 1900 meters ASL — and it’s a single variety plantation. Pure, traditional SL 28 variety.

As evidenced by the quite thick roots and stems of the coffee trees, they were all planted 50, 60, 70 years ago when there only was one variety, or maybe two, back then. They pride themselves on having maintained a single variety. I think that’s something that not many other estates in Kenya can claim. So that coffee can be sold as a single variety, and DNA testing would attest to that.

It also has this tremendous blue-green color. And it’s getting sweeter in the cup as it matures.

Also! They also grow tea on the same estate. So you have tea in the valley, on the steeper slopes, and coffee on the top of the ridge. So in that sense it’s a mixed farm. And it’s owned by indigenous Kenyans. The shares are held by about 2,000 shareholders, who invested in the farm about 40, 45 years ago. They bought it from the British settler who was leaving the country at the time. They have a board of directors and an appointed manager who manages the estate and reports to them. It’s quite a unique ownership structure, but it’s very positive.

GO: So, that’s a rather unusual farm, for the region?

DS: Most of the other microlots originate from the smallholder sector. Smallholders are basically farmers who may have 100 or 200 trees. And they belong to cooperative societies.

Each cooperative may have one or several wet mills that these smallholders deliver their cherry to. They are all unique as well, but they are ultimately all smallholder farmers who consolidate their cherries. They coffee tends to have an interesting character as a result of that process.

You have hundreds of thousands of smallholders. And you also have 100, or maybe 150 large estates, some of which are privately owned and some of which are cooperatively owned, like the Windrush. So each has a unique story and history.

GO: How were the coffees that we have coming named?

DS: The coffee takes on the name of the factory, which is usually named after the village, which often takes on maybe the name of the confluence of two rivers, or a chief from 100 years ago. Those sorts of origins of names we try to establish, so it’s not lost to folklore. Sometimes people won’t even know where the name of their village comes from. Because in the native culture here, there are very few written records, it’s all verbal storytelling. So sometimes it’s very hard to find the right person to ask stories of.

GO: Any other favorites from this group?

DS: Oh, the Kiganjo is one of my favorites. It’s excellent. And the Kanyariri — you have to trill your r, when you say it. Kahn-ya-ri-ri. It rolls off the tongue! •

—
Teaser alert! What’s on the horizon? Incoming microlots include…

Akusi: An absolute standout, bursting with blueberry and red fruit, with a heavy-cream body.